Thanks to Raquel Burns for hosting the Primal Scream Blogfest. Follow the link to check out all the other entries!

Also, one last, final reminder that the Bad Girl Blogfest is Friday! Yay!

This excerpt comes from Dawn’s Rise, set in 2101, when a series of unprecedented disasters threaten Earth and life itself. Dawn has been captured by the evil Chairman, the leader of the world, and she has insisted that Dawn, a budding psychic, provide her a reading. The reading reveals a great deal, but suddenly Dawn sees something much more prescient.

Dawn staggered around the room, her visions furious. “No, no! Please, something terrible is here. Now! We need to get out of here. Death! Death is coming! Oh God, oh God, we’re all going to die—” Her throat screamed. Her eyesight flashed.

“Guards! Get her out of my sight,” the Chairman raged. “Put her back in the Hole. I’ll deal with her later. Do not let her talk to anyone!”

Guards threw on a hood and cuffed her wrists. Dawn fought against their rough hands. They herded her into the elevator and then tossed her into a waiting vehicle. An engine purred to life and they eased into the busy Charlotte streets while Dawn strained against her bonds.

The vehicle flipped. Dawn’s head smacked something hard. Stars shot into her vision and pain wrapped her head. The vehicle hopped and vibrated on its side. Bitter concrete dust and coppery tasting blood filled her mouth. A rumble thundered all around. She pulled off the hood. Dust filled the van and invaded her lungs. Black clouds darkened the sky, blotting out the sun. A guard lay at her feet in a dead heap. Escape. Dawn keyed his pad and unlocked her bolts, coughing and whimpering.

The van shook like jelly. Dawn kicked open the back. Dust boiled in every direction. The street overflowed with piles of debris and wrecked vehicles. Small particles rained. Dawn grasped the van for balance. Grit seared her eyes. Beams and blocks protruded from the dust clouds, the rubble from countless collapsed buildings. High above her tall buildings swayed and shimmied, their façades peeling off. Run! She bounded away, dodging cascades of falling rubble as she ran through the pulsing streets. She climbed up a small hill into an old cemetery. The dust cleared to provide a small vision of Charlotte. Gaps appeared where magnificent one-hundred-story-plus buildings used to stand.

“Okay, time to wake up,” she wheezed on the dust that clogged her airways. “I’ve have enough of this vision. C’mon, wake up.” She activated her Eyespy which reported, “Emergency Standby Mode. Instructions forthcoming.”

A motion caught her eye. “No—no—what is that?” In the distance, a wave of destruction flew across the landscape, a boiling tsunami of devastation. The violent upheaval of earth raced towards her, flinging rivers into the air, tossing cars like toys, and detonating the ground like a vast field of dynamite. This was no vision, no crazy delusion. Her bones rattled, her knees shook, and stomach clenched. Death approached. The wave swept down the streets, lifted the buildings, and before she could take another breath, flung her and the contents of cemetery high into the air. She sailed through the boiling soil, tensing in anticipation of the final impact that spelled her doom.

She slammed into a pile of loose dirt. Her breath escaped her pain-wracked body. Dirt and debris poured down. Her eyes refused to focus, her limbs refused to respond, and raining dirt prepared to bury her with the other corpses. Dawn clawed at the soil, gasping, suffocating. Survive. Just survive. She grasped a large tombstone that had nearly crushed her head. With her free hand she pulled the dirt from her eyes and froze. The grand HQ building, a kilometer high and the pinnacle of modern architecture, imploded and collapsed into the streets in a massive cloud. Thousands of people, crushed in an instant. But behind that—the Edenville Sky Towers. All 325 stories tilted and slid into the earth, thundering and generating towering clouds. “Rose!” Not Rose. Please, not Rose! This vision has to stop. This can’t be happening. I want it to stop. Now! Her stomach convulsed and purged itself. She rolled away, choking on dust and vomit.

The earth shivered and trembled. Dawn crawled from mound to mound, avoiding the churning soil. A smaller wave slammed through the dying city and flipped Dawn like a rag doll. The earth churned and bucked while Dawn clung to a toppled tree, wracked with coughs. Nothing in her visions had prepared her for this terrifying onslaught. Day became night.

The ground opened beneath her, a maw of a giant earthen whale with teeth of broken pipe and rebar. Dawn tumbled down, the bars ripping her clothes and cutting her flesh. A casket gaped, its contents spilling out as the dead rolled from their graves. She grabbed a pipe suspended above the chasm. As the earthen jaws closed in, she fought, climbing up the pipes and bars and out onto the heaving ground. She panted and gagged in the choking dust. Soil slid back towards the hole, but she pulled herself away before the chasm could swallow her again. 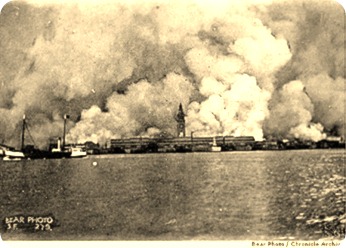