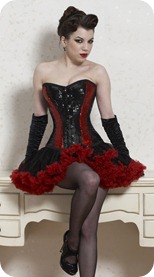 September 28, 1901, aboard a mechohorse-drawn wagon on the River Trail.

Viola eyed the poor woman hiding under the bench. Such an innocent flower, Sophia wouldn’t last half an hour aboard the Steam Palace. She had an attraction about her, an irresistible cuteness that sickened her. Curly red locks, a button nose, freckles, and a wide smile would make her a quick favorite among the men—until one of them used and broke her like every Palace Girl, and she became as black as Viola.

Viola smiled and rubbed the woman’s knee. Men of wealth and women of high repute populated the wagon as it rumbled along the river trail. She was perhaps the only woman of lesser repute aboard, although she dare not openly show it. She winked at a man who caught her eye, and he blushed. His golden chains and silver buckles intrigued her. What might such a man might offer her for a night of pleasure? More than that, she shivered at the thrill of seeing poor Sophia’s reaction if he were to advance. The girl crawled back up on the bench, her face tinged green. Viola slid next to Sophia and threw an arm around her, all the while staring at the man. She rubbed her lips, then licked a finger. He approached as she expected, his hat in his hand.

“I—I don’t exactly know how to do this,” he said, “I’m not familiar with the proper—intercourse—for this type of arrangement.”

Ahh, another Steam Palace newcomer. The women next to her stared at the man without comprehension. Viola declined to explain, enjoying the man’s incoherent turpitude.

He sat down on the other side of Sophia and leaned in. “Pardon me. You see, this is my first visit, and my friend over there,” he nodded to another man dressed in a similar manner, “claims that you are Palace Girls.”

“What is he talking about,” mumbled Sophia, trapped in the middle, holding her stomach and sipping water.

“We are no common Palace Girls. We are Dome Girls, the finest women upon the Steam Palace,” said Viola, ignoring Sophia’s query. Let her squirm. “Both of us for you? Or to share? Do you have a preference? Ten Royals buys your every dream come true.”

Sophia’s face turned a satisfying shade of black and she clutched Viola’s ruffles. “Tell me you did not just sell my services to this man—”

Viola turned to her. “You owe me, and you will repay it exactly as I say.” The woman didn’t respond, she only bent further at the waist. “Sorry, sir, she’s new.”

“Well I don’t have ten royals,” said the man, his gaze glued to Viola’s bosom. “What can I get for a fifty-crown?”

Fifty measly crown? For a Dome Girl? Viola beamed at him. “It’s what we call the ‘backseat special.’ Follow me to the rear of the wagon.” She rose and took the man by the hand.

“Be quiet!” Viola snatched the coin from the man, placed it inside her corset, and led the man to the back, to a small platform behind the luggage compartment, out of sight of the passengers. She reached up and held onto a bar. “Now pull your pants down, just down to your ankles. Good. Now close your eyes.” Once ready, Viola lifted herself up by the bar, swung her feet to the man’s chest, and kicked the man right over the rail. He landed heavily in the mud of the trail and rolled to a stop. Viola screamed every epithet in her vocabulary at him. “You vile dog! Don’t you ever touch a Dome Girl!” The nerve of some people. He jumped to his feet, pulled his pants up, and gave chase to the wagon, but the mechohorse outdistanced him. He fell to his knees screaming and waving his fist. A fifty-crown? Really?

She watched the landscape slip by, slowed her breathing, and then returned to the front. The man’s friend peered behind her. “Where’s Frederick,” he asked. “I thought I heard something.”

“Oh, he’s recovering,” she replied, sweet as molasses. “Why, is it your turn?”

The man pushed Viola aside and headed to the rear.

“Get ready,” Viola told Sophia who now lay on her side. “Cause I kicked little old Frederick from this land train.”

Sophia swallowed. “What? I thought you were—”

Viola pulled Sophia back to a sitting position and approached so close their noses almost touched. “Who exactly do you think I am, Stratton? I’m a Dome Girl, not some cheap gutter wench. That man insulted me, and he paid the price.”

Her companion rolled herself up in a ball, holding her knees. “Whatever.”

The man returned, his face red and spittle-ejecting. “What have you done with Frederick?”

Viola smiled and shrugged. “I guess he got off at the wrong stop.”

“Why you—” the man charged, his hands reaching for Viola’s throat.

Viola whipped out a thin knife and waved it in the man’s eyes. “Come one step closer and I’ll gut you.”

The wagon jerked to a halt. A shotgun-wielding man catapulted from the cockpit of the mechohorse and ran back to them. “Drop that weapon and get the hell off my wagon! Now! Both of you harlots!”

This is from a scene that is slated to be deleted because it is very similar to another scene. But it will live on here forever. Viola has a strange sense of pride about being a Dome Girl and loves embarrassing Sophia whenever she can.