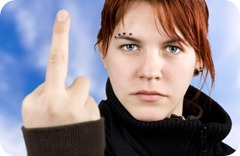 November 29, 2007. Alex Ross has been framed by Carrie Park for blowing up Infinitae’s Building Four. He now seeks revenge and to clear his name.

I drive around San Francisco. Carrie’s smart. She’s probably somewhere monitoring everything. She’ll want to know the second that suspicions are cast in her direction. She’ll want to have direct access to Infinitae’s data gathering prowess.

What about the datacenter warehouse in Santa Clara? Infinitae has blocked it, but that wouldn’t pose much of a challenge to the woman who wrote the blocking code. I head there.

I stop near the warehouse. The streets lay quiet and dark. I have no idea how to get in. I’m not a spy. How would Ellie do it? She’d probably bust a door down. The back door. I drive around and check it out. There’s no handle, only a lock. I get out, put my ear against the door, and I’m rewarded with the roar of still-active servers. Something’s up.

I get back in, line the car up with the door, and slam the gas. It impacts with a crunch. I pull the car away. The door’s frame is loose, and with some wiggling I’m able to pull it completely off, frame and all, probably triggering an alarm.

I draw my gun and remove the safety. I have no intention of killing Carrie, unless she fires first. I head towards the front, searching for the office. I spot it, but it’s empty. A dozen large monitors in the office display newscasts, surveillance footage, and various readouts. One monitor displays my damaged car. The cold business end of a gun presses against my neck.

Carrie. I toss my gun away. My mouth goes dry.

“Put your hands on your head.” She pats me down and swipes my emergency cell phone, pocketing it. She laughs. I cringe.

“Wow, Alex, you never give up. Where’s you friend Elena? Too hurt to make the trip? What a shame. Move it.”

She shoves me into the small office at gunpoint and sits opposite me. “What are you doing here, Alex? Come to kill me?”

“If I have to. You’ve done some bad things.”

Carrie shakes her head. “Hey, I didn’t make anyone suffer for years. Every person I killed died with very little pain.”

You tell yourself that. ”So now what, Carrie? Are you going to kill me?”

She picks up my phone and studies it. “Maybe I should call the news stations. I could be a hero. I’ve already tied you and Ellie to this datacenter. It wouldn’t be a stretch to get them to believe this is your hideout. Hero today, goat tomorrow. And I come out smelling great.”

That would be the day. ”Then what? What’s your big plan? You can’t go back to Infinitae. You can’t escape suspicion forever.”

Carrie points around with her gun. “See all this? Do you know how many emails and IM’s and chats and voice communications I’ve collected? I’ve captured trillions of conversations waiting to be mined. Even as we speak, I’m transcribing all kinds of voice conversations. The NSA would kill for a system like this.”

She leans forward and rubs the butt of the gun on her forehead. “God, Alex, you idiot, do I really need to spell it all out for you? Think of all the corporate insider information I’d have. I’d know about every earnings miss. I’d know how senators are about to vote. I’d know what the Fed is planning. Within a few years, I’d be the richest person on the planet. I could run for office, buy a few campaigns, and who knows? I could be President. Imagine that, President Park.”

She glares and aims her gun in my general direction. “Shelly White is dead. That loser no longer exists. You made sure of that. Maybe I should thank you. You know, we’re really not that different, you and me. Maybe that’s why I liked you so much back then. I was a loser, and you were a loser, too. But guess what? I’ve grown up, and you’re still a fucking loser.”

I snort. “We’re nothing alike. You’re a murderous, psychopathic bitch with delusions of grandeur. You’ll never get away with any of it. They’ll trace everything back to you.”

Carrie shakes her head. “Forget it Alex, I’ve covered my tracks too well. They’ve got nothing on me. Look at this screen. I’m monitoring the entire world for any mention of my name. The moment it pops up, I can be prepared to defend myself.” She waves at the consoles.

I shrug and look around. My leg shakes. Carrie studies my face. “Alex. Are you expecting someone? Oh my gosh.” She looks at my phone, then rips it open. “Alex, I’m surprised at you! This phone has been transmitting this entire conversation, hasn’t it? But it looks like it’s off. Let me see. Ahh, here it is, the battery is it’s own transmitter. I can take it out and it’s still going. Genius!” She smashes the whole thing with the butt of her gun, then points the gun at me.

I can’t help but smile at her. I won. “They’ll be here in a minute. It’s over, Shelly. You’ve confessed to everything. It’s all been transmitted and—oh yeah you’ll like this—posted on the internet!”

Alarms chime all though the building. On the monitors black cars pull up from every street. The entire building is surrounded.

“Come on, move it.” She pushes me ahead of her. I look back as she grabs a device off her desk and pulls out an antenna. Shit.

“What is that, a detonator?”

She pushes me through the datacenter to a metal railing that leads up to a ceiling panel. “Remove the panel, and don’t try anything funny.” The railing leads up past the panel to the roof about thirty feet up. “Climb!”

At the top I push through a hatch. Up on the roof, hidden from the street, stands a small gyrocopter. “Stand back,” cries Carrie. Lights flash in every direction. She jumps into the single passenger aircraft. She pushes some buttons, and the blades spin. I notice that the roof of the building has been cleared out like a runway.

“Hey Alex,” she shouts at me through the growing din of the gyro’s motor, “the moment you stepped inside, I detected your transmission. You think I can’t dampen a cell signal? You’ve lost, Alex, and I’ll make sure you get blamed for this explosion too. Goodbye.”

She revs up the motor and taxies down the roof of the building. I run after her and grab one piece of the rear wing. I hold on for dear life as I’m dragged along the roof.  I can’t hold on and I roll right to the edge of the roof. I have about two seconds to jump off before the whole building explodes in a huge burst of flame. I hit the ground and roll under a car as a deluge of servers and wires and cinder blocks rain down all around me. Once the debris stops, I run, blood oozing from a dozen painful wounds. I spot a car where some people had stopped to look at the fire, leaving it running. I hop into it and speed away.

Well, I’m back at Ellie’s hideout now. There are videos on the web connecting me to the scene. None of my secret transmissions got through. I can’t beat Carrie. She’s just too smart. Her gyrocopter disappeared to who knows where, and I have no way to clear my name. Wherever you are Carrie, know that you can’t escape, and I’ll be chasing you.

Carrie is the most certifiable anti-social megalomaniac I’ve ever created. She’s brilliant, resourceful, and highly manipulative. She’s a classic mad scientist, surrounded by incompetent boobs. And she always gets away in the end.