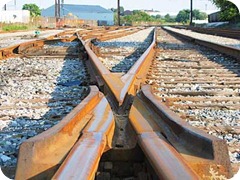 Conflict is when a character is faced with multiple choices and desires a particular outcome.

The black train rumbled down the track, smoke billowing from the stack. A toot blasted from its horn.

Okay, can you spot the conflict? No? Good. There isn’t any. You might wonder why it tooted, but all trains toot four times before crossing a road, so it could be anything.

The black train rumbled down the track, smoke billowing from the stack. A toot blasted from its horn. Susan pulled on her foot, hopelessly stuck in the switch point where the track split.

Now then, we have sense of conflict. We see a character who wants to get out of the way of the train. She has choices here. She can let the train hit her and kill her, she can lay down and maybe only lose the foot, or keep working on the problem.

Conflict occurs when a character’s needs are not immediately met.

Now how does this apply to scenes?

Every scene must contain conflict. Otherwise it’s just a description of a train running down the track. Not only that, but to keep readers involved in the story, every page should contain conflict. You heard me. Every page.

I read a lot of first pages in the recent First Page Blogfest. Most were brilliantly written, but the ones I enjoyed the best contained conflict from the very first sentence. The ones with no conflict made me think, “who cares? There’s nothing at stake here.”

How have you ensured that you have conflict in every scene? Or page?