Thanks to Harley D. Palmer for hosting the Body Language Blogfest!

And let me remind everyone of the Bad Girl Blogfest on May 7! And check out my master list of all upcoming blogfests!

So, the challenge of the Body Language Blogfest is to come up with a scene with no dialog, but still portray a conversation. Umm, I’ve wracked my brain and nothing I’ve written in the last 25 years really qualifies. SO, *takes deep breath*, I’m just going to post part of a scene where there is no “dialog” (okay maybe there’s an exclamation or two…so sue me) but lots of action. Just because I can. So I readily admit that I fail this blogfest test, but I hope you enjoy my piece anyways.

This is an excerpt from Steam Palace. It’s your pretty standard “being chased by wolves” scene…in a violent storm…except our heroine is riding a mechanical horse… 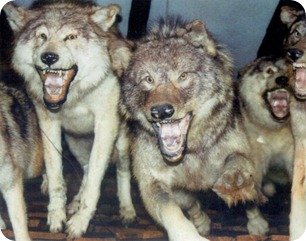 Sophia circled the mechohorse around the thick forest in a fruitless search. Thunder rumbled ever closer, and a chilling wind bent the trees. She halted the machine near a towering rock outcropping and prepared to dismount her lightning-attracting contraption. A growl met her. A lone gray timber wolf crouched on top of the rocks, his teeth bared.

In response, the wolf barked and gnashed its teeth. Hair bristled along its spine, and steam spouted from its nose and mouth. Another wolf appeared next to him, and then another crept behind her on the forest floor. They licked their lips and snarled. Five, then ten of the monsters surrounded her, pawing the earth. Lightning lit their hungry eyes. They approached and sniffed the legs of the machine. Sophia eased the levers forward, hands shaking. They stalked the mechohorse, nipping its legs. Would a wolf pack attempt to down a machine?

She shoved the levers and they chased her with yips and barks. They jumped up against the body and clawed the metal, but could not find purchase. Sophia zigzagged her way through the trees, ducked branches, avoided rocks, but could not shake the pack. An open road would prove handy, but in the closeness of the forest, they must sense her dire predicament. Like a wounded deer, they would pursue until she stumbled, and then they would pounce.

The woods teemed with furry bodies. The lightning struck close and glinted off their yellow eyes and wet fur. A clearing appeared through the fog so she jammed the levers in a wild attempt to lose the hungry beasts. The mechohorse surged forward, pounding the wet ground. Rain slashed her face. She aimed towards the clearing, holding on as the mechohorse rumbled over uneven ground. She glanced behind for a split second. The wolves had fallen back. The mechohorse pitched down in a sickening lurch, jumped a riverbed, and then impaled itself into a muddy riverbank, its front legs digging in. Sophia flew from the cockpit, repeating her performance from the previous day, and splattered down into a pond of mud.

The ooze sucked at her limbs. Behind her, the mechohorse was stuck nose-first into the ground, its front legs bent at an unnatural angle. Sophia pulled herself out of the mud, sliding back to the machine. Furry heads appeared among the trees on the far side of the stream. They spotted her and trotted down to the water as she climbed up to the cockpit. She yanked on the levers, trying to get the machine righted, but it only screeched and shook.

“Come on, come on!” The rear legs swung wildly, the front refused to budge, while lightning flashed all around. Sophia yanked on the sticks, and the machine screamed an ear-piercing shriek, shuddered, then went limp. The levers no long responded. “No, no, no!” Across the stream, the wolves loped up and down along the banks, searching for a crossing. The rain eased, sunlight filtering down in the distance. An oily substance leaked from the seams of the mechohorse.

Downstream, a wolf stepped out on a fallen tree and jumped across, then bounded towards her. Sophia had nothing, not a single means of defense. She grabbed a branch the stream had washed up as the wolf charged. It leapt, and she slammed the branch against its head. It yelped, but turned for another charge. This time, it caught the branch in its teeth, and yanked it out of her hands.

Sophia’s heart raced, and her breath drew ragged, seeing death in the fangs of the voracious beast. Others crossed and converged on her position. The beast finished rending the stick and turned to her, growling, drooling, its ears pinned back, crouching for one final death-dealing lunge at her throat. Sophia backed up until she felt the crippled mechohorse behind her.

So I hope I portrayed a lot of good wolf body language in there at least.