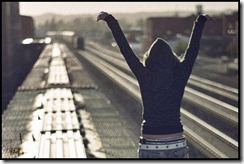 Susan yanked on her foot, stuck in the switch point of the train track. A faraway horn sounded, too distant yet to determine if the train rode upon these tracks, but Susan noticed a tickling vibration in her trapped foot.

The man in the dark business jacket and red tie shook his head. “We’ve been more than patient with you. Your time is up. We need to know Maria’s location, and we need it now.”

“No!” Give up her daughter’s location on the eve of the biggest trial in North Carolina history? Her testimony would put these thugs away forever. She twisted and pulled, but the mechanism held her tight. If she told them, her daughter would be dead before the evening news started.

“As I see it, you have a couple choices here. First, do nothing. Boom! Second, I think you like bend somehow and just lose the foot. You might survive the amputation. Maybe. Third, you could just tell me the name of the hotel. That’s all I’m asking. Not even the room or floor.”

“Never.” Her legs cramped, and she doubled over, gasping for air, tears streaming down her face. Her trapped foot throbbed.

“Hey look, the 2:52, right on time.” He shaded his eyes as he peered down the track. Another horn sounded, closer this time. Susan swirled around. Sure enough, a passenger train rumbled down her track.

“You don’t have to do this! I could talk to her! Tell her not to testify! She can be reasoned with. Please!” Why wouldn’t he listen?

The man sniffed. “Oh really? Hmm, let me see.” He reached into his pocket and withdrew a newspaper. He threw it at Susan’s feet. “Go ahead, pick it up. Pick it up! Look at the cover. ‘Maria Figliano to testify against Mob in husband’s killing.’ Do you really think she’s going to back down now? After all she’s been through? She is one tough broad.”

The horn tooted with more urgency. Susan yanked her foot with a supreme effort, but the tracks held fast. “You could hold me hostage. She wouldn’t want me dead.”

The man snorted. “You are really living a delusion. Tell me where she is, and we can put this unpleasantness aside. That train isn’t slowing.”

Susan glanced at the train. Sweat and tears poured down her face. The horn blasted her eardrums, and the tracks shimmied beneath her.  How had it come to this?

She glanced back at the train and swallowed. “Okay, okay! It’s the Grand Arms Hotel, Room 331! Now please, release me! Hurry!”

The man smiled, suppressing laughter. “Susan, Susan, Susan. You thought you could put my boss away? We already know where Maria is. In fact, she sent me.”

“What? I did what you said, now please, let me go!” The train blasted its horn again and again. He had to let her go!

The man crossed his arms and stepped back as Susan lunged for him. “You see, your daughter suspected all along that you had her husband killed, and then framed my boss. This was her idea: she leaked her location to you, and then we would test you to see if you would give her up to save your own skin. Guess what? You failed. And once she hears that you’re dead, she’ll rescind her testimony. Goodbye, Susan.”

Susan’s chest heaved. “No! No! Oh God, that bitch! Tell that bitch that he got what he had coming! Tell her—”

The train rolled past. The man straightened his tie and walked away, dropping the remote switch point control which could have spared her life.

Notes:
621 words.
I came up with this idea while writing my last Scene Structure post. I decided to play out the scene to see what would happen. Not sure if it quite “works” but I thought it was an interesting twist. I’m glad I finally got around to writing another of these!