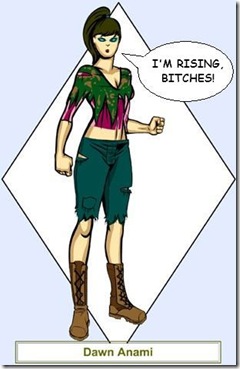 Okay, as you can see over there, Dawn’s getting a bit ticked at the delays getting her story published. Hey, I’m doing my best! Settle down!

I’ve been working off and on on my Query Letter for Dawn’s Rise, as I’ve mentioned in previous posts: Secret Screwup, The One Sentence Summary, I'm Wripped, Done Moving, and a bunch more I’m too lazy to list now.

Earlier this week, I posted my latest version up here on Agent Query. Click that link if you want to read it. As usual, people ripped it apart. Confusing, unoriginal. So I wrote this long reply explaining everything. I use the word “prophecy” in the query but it’s not a prophecy. I use the word “psychic” in the query but Dawn’s not (well, I leave it up to the reader to decide). I talk about the future but even that confuses people. So when all was said and done, I looked at my long reply and thought, “Hey, this isn’t a bad query in itself.” It’s a little cheeky, so I need to tone it down (maybe), but I think I’ve finally captured the essence of Dawn’s Rise in it. It’s a bit long, and I need a closing paragraph with genre, word count etc, but maybe this will finally fly with few edits.

When bad things start to happen, some random person may have happened to make an accurate prediction about it.

In this case, a bunch of people dream of a very tall woman as a Savior during a time of disasters. This woman resembles Dawn, who happens to work as a psychic, but the computers do all the readings based on client's history and interests so she really isn't. Enamored by the idea, she keeps finding evidence that she's this Savior—and of course it's confirmed by this random guy (whose own friends think is nuts). He's also promoting this idea of “Dawn is the Savior” online, so it grows into a worldwide phenomenon. She's an overnight sensation.

She's not super stable, so when the corporations decide to shut her down, she sees it as further confirmation that she's this Savior person. Her own dreams become filled with these visions. When disaster wipes out most of the population, she becomes leader because her "citizen value" is higher than anyone else the computers can locate. As this leader, she tries to work with the computers, but as we all know, computers suck and screw everything up because they have no reasoning—even 100 years from now. So she kills them, a nice logical solution. (not).

So she's completely incapable of performing this job, she's thrown away the only tool that can really help her, and now that the computers have stopped regulating her mental state, she's relying on hallucinations to guide her to save humanity. Naturally, she's overthrown and locked in a jail cell to die. When even her rescuers decide to abandon her, she finally decides that enough is enough—and whether or not she's psychic or insane, she's going to lead mankind to safety. She uses good old-fashioned willpower and conviction and finds that she really can be a leader. The rest is a bunch of fighting and race-against-the-clock action. Interested?

Let me know what you think. Should I focus on this one? Keep the tone? Or just work on the one I posted on the Agent Query site?