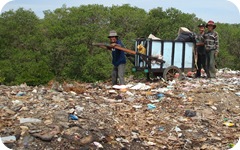 Finally vacated the storage unit we had been renting. It took two trips with the small truck we rented but all our crap is now back cluttering up the place. The day culminated with a trip to the dump where I deposited over 800lbs of trash. I suspect once we go through every thing we just brought back, we’ll be ready for another trip to the dump although I doubt it will weigh so much. Our house now looks like we just moved in with boxes everywhere but we’ll get rid of most of it I suspect. After all, this is stuff we’ve had in storage for three years and never missed. Stuff we’ve had even before a tree fell on us and forced us to vacate half the house and pack up even more junk.

On the writing front, not much is happening, as mentioned in Friday’s post. I’ve been re-editing the “first 30” (now 43) pages of Dawn’s Rise but I’m still stuck on my query letter. However, I think I may have made a breakthrough. rsmellette at agentquery.com was bored and re-wrote my letter. He’s what he came up with:

Savior of the Planet. That's a hell of a job description and not one that Dawn Anami would have chosen for herself, but it was thrust upon her by prophesy. Now she has to contend with a space station breaking away from Earth, a massive world quake that destroys the cities (all of them!), a combination of asteroid and solar flares that threaten to annihilate the crippled station and everyone on the ground, plus groups of refugees battling over the world's remaining resources while the survivors on the space station struggle just to breath.

It's no wonder DAWN'S RISE is 145,000 words long. She needs everyone of them to meet her destiny and save the planet.

I think that’s awesome, and so do most of the people who have responded. I may try a variation of that, and see where it goes. It’s not quite my tone but it works. I’m hoping this is the week I finally send something out.