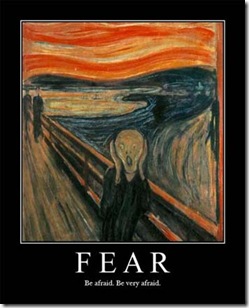 Last night I participated in a discussion on Gather about Fear. I started thinking about the worst fears my characters have. Of course there’s always the mortal danger that surrounds their activities. Heck, Dawn’s Rise is a book all about disasters. Facing one’s mortality head on is always a good plot device. But of course that can get old after a while, so I got to thinking about their other fears.

In Dawn’s Rise, Dawn fears many things. She refuse to accept her role in the book because she doesn’t believe in herself. She fears being exposed as a fraud. She fears losing what little she has. After losing her mother at a young age, she wants to be cautious with her life. Her crazy Aunt has been a terrible role model and Dawn fears that kind of chaos. She also seems to be losing her sanity, so she fears losing her mind.

In 30 Days, Alex discovers a heinous plot and fears for his life because of the discovery that others have been killed. His life is turned upside down and everything he believes in turns out to be a lie. He doesn’t want to lose Elena because he fears being lonely and alone, especially since he thought she was “the one.” He also wants to maintain the respect of his family and realizes they could disown him if they knew the truth. Then once Carrie ruins his life, he fears the humiliation of defeat. Of course he knows his career is ruined, so he fears that his life is over.

One of the things mentioned in the discussion is that in many of the novels, the hero’s worst fears come true. Whether it’s a fear of spiders or fear of something like death of a loved one, the hero must face this fear and work through it. In Dawn’s Rise, Dawn does lose everything and goes a bit crazy. I’m wondering though if I should ramp it up a bit, IOW illustrate the fear a bit more, and then really drive her down into the depths of it until she’s practically paralyzed. In 30 Days, Alex never truly faces his fears and is buffeted around like a cork in rapids. That’s partly because of his role as narrator and partly because I wrote it all on the fly and it needs massive edits. There needs to be a point where he stands up to Carrie and Ellie, tells them to kiss off, and fights for his own life and well being. I don’t know if he even gets to this point in the sequel. Well, there’s always the final blogvel coming up in November.

And then there’s my fear, that I’m doing all this writing for nothing, that I’ll never get published, and never accomplish the one thing I’ve always wanted to do with my life. (Aside from becoming an Astronaut…I gave up on that dream a long time ago). I guess I need to face this fear. The biggest obstacle is really my fear of rejection…that my writing is crap and no one will ever read it. I don’t know how much of that I can take. But like my heroes, I’ve got to face it and overcome this fear, and not live my life afraid of failure.