I talked to the kids last night about the Swine/H1N1 Flu. They hadn’t heard a thing about it. Apparently their schools aren’t talking to them about washing hands etc. I told them not to worry, it was still far away. Today there’s a school closed in Seattle because of it. Like closing a school makes any difference. So far, people seem to be treating this outbreak like…well…The Plague. We don’t even know how severe it will be. If there’s a 10% mortality rate like in Mexico…then we’re fucked. If all 306M citizens in the US get this flu, then 30M will die. I seriously doubt that will happen. However, I like to write Disaster genre novels so it’s the kind of thing I think about.

Since I’m a self-proclaimed “Master of Disaster”, let me tell you the mostly likely scenario. A normal flu outbreak claims about 36K people a year in this country. Since no one has immunity to this strain and there won’t be a vaccine available for months, it’s likely that this will spread quickly. We can expect 2-5 times more deaths, so 70-150K deaths from this. Timing is everything. Flu doesn’t spread as quickly this time of year, and people are paranoid about it, which could delay the spread enough to allow the vaccines to be distributed. So far it’s been contained mostly to the younger, more mobile population. Once it hits nursing homes and hospitals it will become much worse. 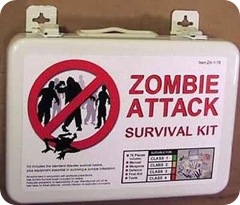 So what can you do to prepare? The usual stuff. Find a place up in the hills and have no contact will people until the vaccine is available. Arm yourselves against angry mobs of looters once the government falls. Don’t forget that the survivors may be forever altered…and could turn into Zombies. Stock up on a year’s supply of MRE’s. Learn to survive out in the wilderness using traps made of maple saplings and clothes made out of bark. But don’t panic or anything. Everything will be fine. It’s not TEOTWAWKI. Yet. Just watch out for the wild dogs.