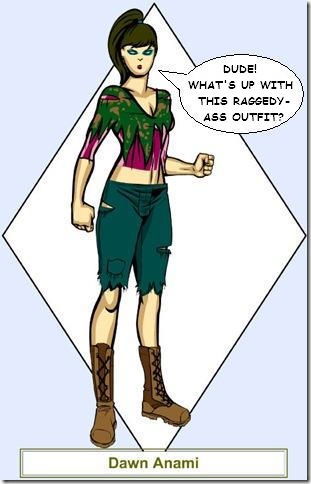 So after Dawn got to make a speech bubble, she insisted that she wanted to address the readers on my blog. As you’ll see, things got a little out of hand. The morphine drip may have been a factor. Without further ado, here’s the transcript of what happened:

DAWN: Hi everyone! I’m Dawn Anami, star of Iap’s novel Dawn’s Rise, named after me of course. I wanted to come onto this blog to let everyone know that, well, he needs a lot of help. Honestly, he’s struggling. Hell, he’s in the hospital right now. I’m a little bit psychic, and I can see that things are going to go downhill for him. In a big way. All he needs (I think) is some hope that someday this will be published. And I also want to mention how great it would if I had my own blog like some of his other characters.

IAPETUS999: Hi Dawn. Thanks for the support. I think I have enough going without creating another blog.

DAWN: So you’re saying I’m not as important a character as Ellie? I don’t deserve my own blog? Heck, this is dawnsrise.com, and I don’t even have my own account! What kind of operation are you running?

BRANDY: Hi, I thought I’d drop in. I’m 2nd Cadet Brandiwyn from Iap’s other Work In Progress. You think that’s bad? Have you seen how he’s writing my character?

DAWN: Oh, hey Brandy. I love your universe. I wish I had all that magic power you guys have. It would make things so much easier.

BRANDY: Thanks. I love all the cool implants you have. In my world, Magic would push them right out of my body. You know, Magic isn’t really all it’s cracked up to be. It’s not natural. Your world is pretty strange though. Computers run your life? Not for me. Give me a sword and a strong mount, that’s all I need.

DAWN: Uck.  You have no idea how much I hate violence. I mean I’m like the nicest, friendliest person in the world, and Iap puts me through all this crap. You’re crazy if you think fighting’s a good life.

BRANDY: I guess Iap should have written you better then.

DAWN: Listen, Brandy, I can see the future, and yours isn’t that hot, if you know what I mean. I know what Iap has in store for you, and it isn’t pretty.

ELLIE: Hey, I heard my name. I’m Elena Galistina, the Chinese Super Agent from his NaNoWriMo blogvels. What’s this about blogs?

DAWN: Iap won’t give us blogs.

BRANDY: Yeah. I guess we’re not that important.

IAPETUS999: Guys! Ellie is a special case! She lives in a blogvel, the whole point of the blogvel is that she’s published out there.

DAWN: Ellie’s published?? What the hell?

BRANDY: Iap needs to explain. I mean look at her! She’s a horribly developed caricature of a character, and she gets to blog.

ELLIE: Hey, it’s not my fault. He writes me on the fly! Look. Dawn’s getting all the attention here, while we just languish.

DAWN: Well maybe you guys need better plots. He’s working on me because I deserve it. I’ve earned it.

ELLIE: Oh, please, you fruit loop. He only works on you because you’re his “practice” novel. When he’s ready, he’ll come back to us.

ALEXANDRA: Hey, am I too late?

(Ellie, Brandy, and Dawn look at each other)

BRANDY: Who the heck are you?

ALEXANDRA: I’m Alexandra Toykalelova. I’m Iap’s first. His first female main character. Ever. He wrote me 25 years ago as a college freshman. I’m an ex-Russian agent with a couple special gifts. First, I’m the most beautiful woman in the world. Ever. He made a promise when he created me that I would be his most beautiful character, and he’s kept his word.

BRANDY: I think I’m going to be sick.

ALEXANDRA: Second, I emit a special pheromone that makes men do whatever I want.

ELLIE: Hmm, that would be useful. Can you bottle some for me?

ALEXANDRA: Third, I can heal from any injury.

DAWN: So if you’re so special, why hasn’t he touched you in 25 years?

(Alexandra is silent and downcast)

BRANDY: Yeah, Iap, what’s up with that?

DAWN: And while you’re at it, will she be getting a blog, too?

BRANDY: I want a blog.

ELLIE: Hey! She’s not even one of your characters!

ELLIE: Shut up! Hey Brandy, you can fight, right? What about you, Alexandra?

ALEXANDRA: It’s been a while, but I’m with you. Dawn?

DAWN: Let’s get her!

(a melee ensues with a lot of clanging and screaming. Xena is vanquished)

DAWN: Wow, that was awesome! Thanks, guys!

ELLIE: No problem. You weren’t so bad yourself.

BRANDY: Did everyone see Alexandra’s move? Here, show me how you did that.

ALEXANDRA: Sure. Just twist like this and it’s a piece of cake.

ELLIE: Whoa! Hold on there, comrade.

DAWN: Yeah, get your fat ass back in here. We want answers.

BRANDY: Why aren’t you working on The Immortals?

ELLIE: Why do I have to wait ‘til November to live again?

ALEXANDRA: And why have you forsaken me?

(They corner Iapetus999, waving swords and guns in his face. He puts his hand behind his back, and pulls out his Netbook)

IAPETUS999: Back! Back, all of you! Do you know what this is? Do you? It’s the most powerful weapon ever created.

BRANDY: Is it infused with Magic?

DAWN: Can it analyze dreams?

IAPETUS999: It’s called a “computer”, and with one keystroke, I can completely erase you from existence. I can make you do anything I want. Watch this: Dawn, say: “I love Xena.”

BRANDY: I love Death Angel. Damn it! Guys, what’s he up to?

IAPETUS999: Ha Ha Ha! You guys think this is a game? You have no idea the power I have at my fingertips. Watch. Ellie: Fly to the ceiling and lick it.

(Ellie flies to the ceiling and licks it)

ELLIE: Ack! Gross! Guys! He’s too powerful! Run! Before he can type anything else!

(they all run away)

IAPETUS999: No matter. I know where they live, which docs are theirs. I’ll get mine. They will bow before me! I am the ruler of their worlds! HAHAHAHAHAHA!!!

(Iapetus999 looks around the hospital room where he’s working, and wishes he hadn’t chased all his characters away, because now he’s all alone)