I found this awesome site called Hero Machine that lets you create comic-style images of heroes. So I made a picture of Dawn from Dawn’s Rise, the novel I’m trying to publish. 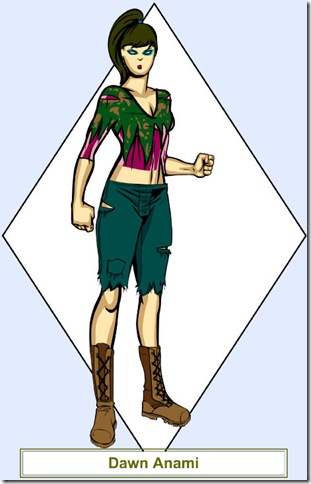 The outfit is something from the late middle part of the book where Dawn has to wear whatever scraps the remains of the HLSCO Army can find, which of course don’t fit her very well.

Here’s how I describe it in the book:

She threw on a plain tee shirt and jeans, which was fast becoming her outfit of choice. The jeans were Capri-styled, ending just below her knees. For shoes she wore some black combat boots. Her shirt had some simple lettering on the breast: “Property of HLSCO”. They had also found her a large camo jacket for travelling outside.

Well the image isn’t exactly the same as the description. They also provide a ton of implements for her to hold, but I didn’t find any that were appropriate. If anyone makes their own character, upload the image somewhere and I’ll link to it from here.