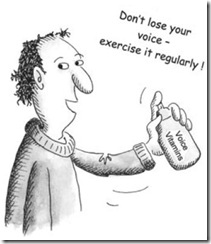 I’ve been thinking over the last couple of days about my “writing voice.” Have you ever noticed that when you read things like emails and blogs from people, you can actually hear their voice in your head? It’s like they’re talking to you as you read. My writing voice is kind of like my email/blogging voice. Not super great. Lots of adverbs and adjectives, if/then/but/and/or run-on stuff, and not much description. In fact, during editing I’ve removed a bunch of description as being too “descriptive” and not “active.”

I need to find my literary voice. An agnostic impartial voice that just describes the actions and scenes. People keep telling me about the screenplay model. A screenplay is essentially an instruction kit for a movie: “First actor A says ‘blah blah.’ He walks left. Actor B says ‘blah your own blah’” I need to eliminate anything that’s not active. Note that thinking and feeling are not activities. It’s important to hear the inner monologue sometimes, and that’s really what separates novels from screenplays, but I think I’m not doing it very well. I really think I need to take some literary classes.

I’m left with these issues then:

Note that these aren’t my only literary deficiencies…but I can only tackle so many at once.