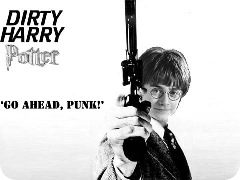 This morning, QueryTracker.net posted a “write your worst query ever” contest. Before I left for my workout, I posted a terrible query (which I’ll post here after the contest closes), but during my swim I kept thinking about other ideas. They suggested referring to Harry Potter in the query, so I starting thinking about a really terrible Harry Potter rip-off. Something like Harry Potter meets When Harry Met Sally meets Harry and the Hendersons meets Dirty Harry. “Go ahead, Hermione, make my day. Sally, are you feeling lucky? Well, do you, punk?” As I thought of each title to add to the list, I kept laughing. With my head under water. Just try it some time. It’s impossible to hold your breath under water while smiling, and laughing at your own jokes becomes unpleasant when water invades your nose and throat.

Anyways (takes deep breath above water), my Jedi Triathlon Training is complete! I am now a Triathlon Master, ready for my first challenge. I may run a couple miles tomorrow just to stretch and stay loose. I had a chance to run a quick “practice” triathlon last night but I felt so worn out after about ten straight days of training that I bailed on it. Rest is as important as training (as is beer). So in two days, at 7AM, I jump into a lake and begin my journey into triathlondom. Stay tuned for an extensive post-race report (unless I bail from the race, then I’ll just tweet something sad. And I will not bail unless a bone is protruding from my body. DFL is much better than DNF. (dead f-ing last, did not finish))

On the writing front, I rewrote my Agent Query for Dawn’s Rise for like the 7th time. However, inspired by a ton of feedback and writing critiques, I finally have something I don’t completely hate. I sent it to a query critique site which will hopefully help me fix it up a bit. I posted an abridged version on my Authonomy site, so you can read it there. They only let me post 200 words, so I had to pare it down. My guess it that my optimal query lies somewhere between the two. The shorter one actually reads better but it’s a little choppy. It’s a challenge trying to figure out how much information is enough information to entice an agent. If anyone wants to critique it like me know.

So wish me luck! I’ll try not to think of anything funny during the race.