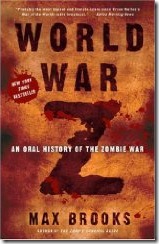 I just finished Max Brooks’ World War Z and I loved it! Exactly what I’m trying to accomplish in Dawn’s Rise: a disaster that affects the entire world. World War Z is an “Oral History” of a Zombie Apocalypse as told by survivors of the event. It goes through all the stages of the event, from the first outbreak of zombism to the final solution. It’s richly detailed and researched, and it’s the best book I’ve read all year. I’m really hoping it gets made into a movie, because I can see the whole movie in my mind.

Anyways, in honor of reading this book, I’m reposting the scene where Alex Ross and the gang fight off zombies in the heart of London last November. Unlike World War Z, these are not infected, they’re regular people who have been hit with a pulse from the Singularity Matrix. The pulse scrambles their brains for a few minutes, but only if they’re sober. So Alex and the gang have just liquored up, knowing the Matrix was about to fire. Without further ado, here’s my (slightly edited) homage to Zombies at told by Alex:

The floor pressed cold against my head. My ears rang and my vision swam. The room spun in big circles. Car alarms and horns rang the air. My head throbbed, painful, aching. The people scattered on the floor struggled to rise. A rage built inside me. I wanted to hurt someone. I wanted kill, to rip someone apart, feel their blood and bones in my mouth, to tear their flesh apart.


A wave of nausea washed over me and I rolled onto my back. I couldn't find the balance to rise. "M--M--Misty," I mumbled. She lay beside me, pushing herself up, a confused look on her face. I couldn't spot my other teammates. Her face contorted in a mask of anger. She bared her teeth and growled at me, breathing quickly.


"Ahh!" She jumped, snapping at my throat. I snatched her arms and maneuvered behind her, holding my arms beneath hers and pressed her neck in a full Nelson.


She struggled and fought against me as I called her name. With a great push, she freed herself and faced me, spit flying from her mouth as she gnashed her teeth. Behind her rose Ellie, a rifle in her hand. Misty jumped and Ellie fired.


"No!" I cried as Misty landed in my arms. "Ellie, what the hell did you do!!" I felt Misty's body convulsing against me. "Misty!"


Ellie shot again, this time over my shoulder. The other patrons of the bar had awakened, and the more sober ones attacked each other. I felt Misty, searching for the bullet hole.


"Alex, I didn't shoot her," cried Ellie. "She's just coming out of it. Now put her down and help me fight!"


I hugged her, then released her. My eyes refused to focus on the attacking zombies. The room spun, and I saw two of each zombie. Rod pulled himself off the floor. "Julia's still out," he said.


In a fury of fire, we shot all the zombies in the bar. Misty crawled over to Julia to try to revive her. "Julia, baby, come on, get up." The girl stirred, but her head lolled to the side in an alcoholic stupor. I almost passed out myself.


"Here," said Ellie, passing us each some pills. "This may not make you sober, but it will wake you up, and counter some of the effects of the booze. Hurry up."


Outside, a number of zombies roamed around the streets. They attacked each other, gnawing on each other and beating their target's heads. Bones crackled like kindling as they used every ounce of madness in their attacks.


Misty coaxed Julia to take the pill. As we stood guard, my brain stopped reeling, and the zombies stopped doubling in my vision. Julia crawled to her feet, and gasped at the sight of all the dead bodies.


"You still ready for this," asked Misty, and Julia nodded.


"I'm not afraid," she said, despite her trembling. "Let's go." She started listing to the left but Misty propped her up.


We peered out the door. For the moment all the zombies in range seemed occupied. "We've got to move fast," said Ellie, "before they can reload the Zombie Ray."


We scampered down the street, stepping around the mutilated bodies and pools of blood. Screams and growls poured from all the buildings surrounding us. Piles of damaged and steaming cars littered the street, some with zombies inside beating senselessly against the windows, unable to manipulate a simple door handle. As we approached one car, the window burst open in a shower of glass, and the bloodied zombie crawled out on broken arms. It spotted us and ambled towards us, but Ellie felled it with a single shot to the head.


A thick drizzle settled in on us. A group of zombies milled about along an overpass.


"Why aren't they attacking anyone," I wondered aloud. "Are they recovering?"


A non-zombified woman ran down the street. The group spotted her and jumped off the overpass. Surprisingly, many of them continued the chase on broken ankles and legs. She screamed and ran harder, but a body tripped her. The group pounced on her, and in moments I could see flesh and entrails raining out from her body. The group stood back up, surveying the street, a somewhat satisfied look on their faces.


"They're forming packs? This is not good," said Ellie. "Come on, before they spot us."


We slipped around a corner, trotting towards the River Thames. Either the pill wore off, or the alcohol continued to flood my system, because I felt drunk again. I stumbled and veered, unable to run straight. Julia bumped into me and we both fell down into the wet street.


"Hee hee," she giggled, her eyes glazed and unfocused. She spoke in her incomprehensible Tagalog, singing something. She wrapped her arms around Rod as he helped us up.


"Fight it," said Ellie, not looking so steady herself. "Behind you!"


A group of about 5 zombies charged us. Ellie fired on them, missing our heads by inches. The last one dropped right at our feet. "Dammit," she cried, "I can't fucking shoot straight. We've gotta get sober! And those were all the pills I had."


We began to lean on each other for support, like a group of drunk partiers. "Here comes more!"


We turned around to find about thirty zombies closing in on us. We clumsily reached for our weapons, almost knocking each other down. I tried firing but nothing happened. I fiddled with the safety and released it. At about ten feet distance, I emptied my gun into the oncoming screaming mass. In a moment, they dropped to the ground, quivering. Then slowly, they picked themselves up. If anything, they seemed doubly angry now, howling and growling and reaching for us.


"Head shots," yelled Ellie, firing down the street at another approaching group.

I reloaded my gun, and this time took careful aim, dropping them one at a time. The assault seemed to clear my head a bit.


"Move it, we're about a block away from the river now." We sprinted down the street as the rain increased. The Zombie Ray had knocked out all power to London, but the suburbs still lit the clouds enough for us to see. Ellie didn't want us to use headlamps.


At last we made the river, and started heading East towards the remains of the Tower bridge. We saw no signs of British or Chinese forces, except some abandoned military vehicles and some corpses that could have been soldiers. Hard to tell in the dim light.


We arrived the Blackfriars Bridge underpass. Ellie switched on a small light to guide us through the impenetrable darkness. Julia pressed close to us. We passed through the first underpass without incident, but under the second bridge we detected rustling. Ellie held up her hand. "Lights," she whispered, and we turned them on. Surrounding us lit dozens of faces, peering out from the dark. Only now do I remember hearing that some zombies prefer to lie in wait, springing on unsuspecting prey. As one, the horde screamed and jumped out at us. As one, we opened fire with everything we had, completely surrounded.

We formed a ring with Julia in the middle. Inside the tunnel, the sound of guns deafened us, and the only light came from the muzzle flashes of our guns. I shot at all the faces I could see. My gun clicked, and I stepped into the ring to reload, coming out again to fire. Still they came, some with missing limbs, some with holes in their heads but not completely dead, most with blood pouring out of their bodies. The carnage was indescribable. The pavement pooled with their blood.


"This way," shouted Ellie. We pushed our defensive ring East, trying to escape the tunnel. The road beyond appeared clear.

My gun emptied again, but before I could reload, one of the zombies snatched it from me, and I stood face to face with a crazed man reaching for my throat. I whipped out a pistol and shot him between the eyes. Another zombie jumped towards me, this time a maddened but attractive woman. I shot her too, but her momentum carried her into me and knocked me and Julia down. Rob turned to help us up, but two zombies grabbed his waist and pulled him away. I heard him screaming somewhere in the dark.


I shot into the darkness, hoping to hit something and save Rod. We fired like crazy, a deafening barrage in the confines of the underpass. We beat off the zombies for a moment, and climbed over the bodies to find Rod. We discovered him crumpled in the corner, bleeding from a dozen places, a knife in his hand.


"You good," I asked him, and he nodded. He screamed when he tried to put weight on his foot.


Ellie knelt down and felt it. "Broken. Come on, help him."


Misty and I put his arms around our shoulders, and carried him out of the tunnel. We hadn't gone fifty yards when Julia screamed. A horde of zombies, dozens of bodies thick, ran towards us, down from White Lion Hill.


"Give me your guns and leave me here," said Rod. I'll fight them off, you run. The river walk looks clear."

It looked like every zombie in the city converged on our position.
"No!" screamed Julia. "We can make it."

Rod sat down painfully, and held Julia's hand. "Julia, I have to. It's the only way. You can't carry me. I'll be alright. I want you to live. Please. Now go, before they spot you."

Julia tore herself away from Rod. We handed him a pile of everything that could fire a bullet, and ran down the river walk. In a moment, the echoes of gunfire reached us. Rod shot and shot, and then, silence. Only the screams of the zombies filled the night.