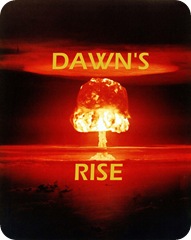 Isn’t this exciting? A bonus weekend blog post! Since my last post was dedicated to Triathlons, this post is all about writing. I’m also going to present you with the first line of the soon-to-be-classic SciFi masterpiece Dawn’s Rise. Okay, maybe classic in the sense of a classic disaster, but a classic nonetheless. BTW what do you think of the book cover I took all of about 5 minutes to create?

Here’s an update on the writing front:

I’ve been thinking that writing literature is not that different from writing software. I’ve developed a good plot, I have a lot of excitement and action, and created interesting characters. Now it comes down to the mechanics, the engineering if you will, of the actual words. Each line of the story must work like a line of code. It must have a purpose and a function. It must adhere to accepted literary standards. The weird thing is that instead of programming a computer, I’m developing code for the human brain. As you read each line, I expect it to affect your brain in a certain way, by creating an image, by eliciting an emotion, or by driving a thought. My story must get inside your head in a way that compels you to read more and give me your money! (is it working?)

Okay. Now, without further ado, here is the First Line of Dawn’s Rise.

Interesting? Compelling? Stupid? Give me some feedback, people!

Here's my NEW first line, and the feedback from Victoria Mixon. She's an editor-for-hire but I won a first-line-edit from her.

Red letters scrawled across John's vision, projected from his Eyespy.

This sentence has the mark of an excellent first sentence: power. It's straight-forward and direct, no fancy footwork to confuse the reader. Writers often misunderstand just how important it is to come across in that first sentence with authority, to sound as though you know exactly what you're talking about. John Gardner discussed this in On Becoming a Novelist when he compared the first sentences of two of Melville's books, showing how "Call me Ahab" carries that authority that says to the reader, "I know how to tell this story. Sit back and listen. You're in good hands."

Your sentence has a character in it--excellent, tells us whom to pay attention to--a visual, the red letters--excellent, pulls us right into the scene with something concrete to picture--and the information that this story is, if not sci fi, at least science-based (this matters, because the reader's not always paying close attention to genre if they find something they like on a shelf), with the named gadget Eyespy. Terrific.

As far as the character, I hope he's either the main character or the narrator, as this reads as if we're going to get this story from John's perspective. This is communicated through the visual clue: we're not looking *at* John doing something, we're looking *through* John's eyes. This is very important. You've given us the information that you want us to do that. Your sentence carries enough authority that I think you probably did this intentionally, but it's worth mentioning.

As far as the visual, that's good. Red's an arresting color, plus it implies that John may be reading a warning, which is a great hook. Even if it's not a warning, you have now given the reader the impression that danger is part of this story. We read red that way, particularly on a technological gadget, particularly in a first sentence. The visual's also not overwritten, good again. It would have been very easy to get involved in what the letters look like, trying to insert an overloaded image into the reader's head right off the bat, which undercuts the authority of the sentence. If you want to talk about what kind of red letters they are, you certainly can, but that info does not belong in the first sentence.

As far as the technological gadget, you give us several concrete pieces of information about it: it projects letters onto a person's vision (onto their eyes? in front of their eyes? good question--the reader likes questions, and a page-turner by nature is a book in which the reader is constantly asking important questions and reading to find the answers). You also tell us with the name that this is its purpose: to interact with the eye. Not only that, but there's a hint of danger in the reference to 'spy' that, again, gives the reader a little jolt of warning.

Your sentence opens with the word 'red' and closes with the (partial) word 'spy'. If your intention was to tell the reader, "This story is about someone getting into danger through their need to know others' secrets" you have hit the nail right smack on the head.

The one thing that threw me is the verb form that could be a past participle, in a position in which this particular common past participle often turns up: "scrawled". It would not be at all unlikely for the sentence to read, "Red letters scrawled across John's vision [did something]." It's a good, active word, but it makes the reader think about it, which is a problem. This is compounded by the use of a past participle "projected" in the following phrase. I'd alter "scrawled" to some verb with a less common past participle

Good luck on your book. It looks from the chapter name as though you've thought your plot through carefully. All the best to you!

Here's the first line of The Immortals. This is totally first-draft, so it's highly likely to change.

A heavy hand slammed Amelia's face and she tumbled onto the ground.