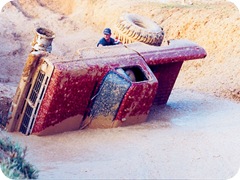 Sometimes I feel like this guy in the picture: stuck in the mud with my wheels falling off.

I’m sitting in an extremely stuffy shuttle ride listening to FOX radio. I don’t know which one makes me want to barf more. I just got out of a strenuous swimming workout to find a nice puddle under the truck. Not quite as bad as in the picture, but distressing nonetheless. I’ve suspected that it’s been leaking for a while, but this was clear confirmation. So I drove it to the shop and I’m taking the shuttle home. This is my first time blogging in a moving vehicle and let me tell you…it’s nauseating! Dramamine anyone?

As of right now, I only have one swim, run, and bike workout before my Tri! And a lot of hand wringing and second guessing. I met some guys at the lake the other day when I went to work out, and one of them is in my age group. This means we start at the same time. It’s nice to have at least one guy at the start to hang out with and deal with the nerves. I think I can take him in the swim, but he’ll destroy me in the bike and run.

On the writing front, still editing away. I may take a break and work on my query a bit. I’m still trying to get the hang of editing. Once again, the parallels to computer programming are staggering. In a lot of cases, when stuck with kludgy or crufty code, sometimes it helps to delete the whole thing and rewrite it from scratch with a different structure and feel. I’m finding that it holds true for old narrative as well. My writing at one point served a purpose, but with changes in my style and details of the book, the old writing doesn’t work anymore and simply needs to be thrown out. So will I wind up literally rewriting the whole thing? I don’t know. That would take additional months of effort, meanwhile I’ve made absolutely no progress on my new project.

So here I sit, the wheels coming off, drowning in mud. Damn, I hope that’s not a premonition for my Triathlon!