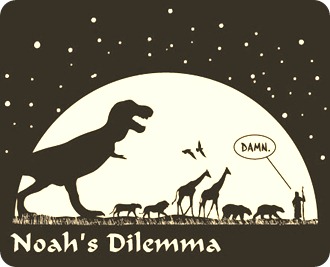 Okay, I’m sitting on the horns of a dilemma.

Remember about 6 weeks ago I made an announcement that I would write a sequel to Steam Palace for NaNoWriMo? Problem is that I have this other idea that’s been festering in my head for a long time. It’s a detective story. Not Steampunk, not Sci-Fi, future, past, or anything. Just a contemporary mainstream murder Mystery in a local setting. (Okay, there will be high-techy stuff in there…come on).  Have I ever written a mystery? No. Not even a short, not even a flash. Do I read a lot of mysteries? No. I do watch them on TV…does that count?

So why this story? Why am I considering this crazy idea? I’m not going to talk about the specifics of the concept here, at least not until after NaNo. Suffice it to say that it’s a mother-son sleuthing duo, told from the son’s POV. Here is my reasoning:

So maybe those reasons are wonky. I have some great thoughts for SP2, but I don’t think I’ll be ready to draft it quite so soon, it needs a lot more thought. And after NaNo, I’m also going to turn my attention to another neglected project, The Immortals, and try to figure out what to do with it. Meanwhile I am still working on marketing SP1, more about that in an upcoming post.

So as of now I am strongly leaning towards the mystery concept. This should be fun.