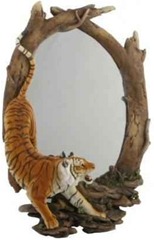 Or maybe it’s an allegory. Anyways, I hear a lot about the peaks and valleys of a novel. Rising action, increasing the stakes, adding tension. Your Hero is climbing a mountain, and must struggle to reach the top, which is the pinnacle of his achievement.

Let me introduce another metaphor. To play along, hover your mouse over the links.

Your Hero starts out in a nice forest, constantly pursued by a hungry tiger, but the tiger is kind of old, been chasing him for a while. He’d like to not have that damn tiger around…think of what he could do without it always messing him up. He’s tried to chase it away, maybe even kill it, but it just keeps coming back, growling, eying him, stealing his food and eating his women.

So one day he’s out, trying to avoid the tiger, and he sees this beautiful meadow in the distance. It’s a wonderful meadow, full of flowers, little sparkling steams, and of course—not a tiger to be found. How wonderful it would be to live in such a place! But there are no roads, no paths that lead there that he can see…except through a dark, cloud-filled valley. He can’t get there. Oh well, another day, another tiger.

Later on, he meets an old man. They get to talking. The old man says, “yep, that’s a tiger alright. You sure you wanna get to that meadow over yonder?”

“Well, it’s quite tiger-free from what I can see.”

“So, what are you waiting for? But be careful, only the strongest survive the passage through the valley.”

“What is anything worth?”

Pissed off by the old man’s simple-formula riddles, the Hero decides to take a quick peek down into the valley. But this is no ordinary valley. You see, for every one step in, it takes ten steps to get back out. Think of place with down escalators only. Before he’s taken ten steps, the clouds close in, the sun disappears, and the top of the valley vanishes from view. Before him he sees many paths, behind him only murk.

After stumbling around for a while, the old man joins him.

“Good luck. Old Mr. Tiger is sitting up there and he’s pissed that you left.”

“There are two paths you can go down, but in the long run, there's still time to change the road you're on.”

“Did you just quote Led Zeppelin at me??”

The old man sits on a rotten log. “Son, listen. You ain’t alone in this valley. We call this here valley, ‘The Valley of the Lost.’ Many people have come in here, escaping their own tigers. Find these people, learn from them. Some will be friends, some will be deepest enemies. But at the bottom of this valley, where it’s hot and fiery, you will face your greatest test of all. If you fail this test, you will wander this valley for all eternity, but if you pass, you will achieve whatever you desire.”

“I preferred the Led Zep to that. Fine.”

So your Hero explores the Valley, learning where there lies food and shelter, finding the company of friends and women, and mastering skills he never dreamed of. But each step drops him deeper and deeper, and the clouds fall like a shroud to block any thought of escape. Friends come and go, some stick for the long haul, others fall by the wayside. Finally he arrives at a steep precipice. Boiling wind and the scent of brimstone blast out from the crevice at the bottom.

With only his most trusted allies at his side, he climbs down the sheer rock face, hands and feet burning, each step full of peril. They make it, scarred, but still breathing.

A wispy figure approaches. “Who dares disturb my sleep?” A Dragon emerges from the smoke. “Why are you here?” With one snort he could cook them like blackened catfish.

“I’ve come to get to the meadow, where there are no tigers. Now give me my test!”

The Dragon swallows laughter. “Good one. You do know what the tiger and the meadow represent, right?”

Your Hero has no clue. “Uhh, shut up and fight. I’m tired of riddles and games. I am sick of frickin’ tigers, this stupid-ass valley, and I’m sick of you.”

The Dragon checks his nails. “Be still, my petulant one. I will grant you all you wish, but only after you perform a simple thing. It’s nothing, really. All you need to do is slay all your little friends you brought with you, and I shall set you free! Go on…start with that chubby one. Daddy’s hungry.”

The hero looks at the chubby one, draws his sword, and cuts off the dragon’s head. For a split second, the clouds part, revealing the one path out of the valley.

So our weary band of the Lost whoop and holler and head back out of the valley and make it to the magical meadow they have sought…only to find themselves surrounded by tigers.

The tiger that has stalked him all his life approaches and speaks for the first time. Behind him are all the tigers who have chased your Hero’s friends. “Well, well, well. So you made it back. And we are extra hungry. Now in your haste to jump into the Valley, you probably didn’t notice that you could have just walked around the long way and reached here anyways. Dumbass.”

“You woulda followed me,” says the hero sullenly.

“Duh.” He places a paw on the Hero’s shoulder and breaths stinking hot breath on his face. “Now I see you have a couple choices here. First, let me take you back home. You’ll be my bitch, of course, much worse than before, but you’re used to that. Second, you could go back down into the Valley, but I’d eventually find you there. Third—“

“Third,” interrupts the Hero, “me and my merry band can kick your furry ass. We beheaded the dragon, we found our way out, and you’re no match for us.”

The tiger laughs. “That is rich. But there is one thing you are forgetting. One small detail. Old man?”

The old man steps out from behind the tigers. He hands the Hero a hand mirror.

The Hero raises it. “Is this a special weapon? Should I smash them with it?”

The Hero looks in it and sees a battle-scarred warrior. But behind the dirt and blood, there is something else.

He sees a tiger. He gasps. He looks at his fellows. All tigers. Well, the Chubby One is more of a pussycat but you get the idea.

“So,” says the Tiger, “do you understand all the symbolism now? Do you need me to explain in tiny, easy-to-grasp pieces?”

The Hero sighs. It is all clear now. “Yes. All this time, I’ve been running from myself. In the Valley, I learned to face my fears in a controlled environment. And now I’ve returned to finally overcome myself and fulfill my destiny.”

The tiger blinked. “Uhh…interesting, but no. We’ve chased you all your life because you have the potential to become strong, and we can’t have that. We paid the old man to lead you to the Valley of the Lost, because no one ever escapes. We are not your fears, we are the Rulers of the Meadow, and you are nothing, you never were, and you never will be. Now lay down your arms and surrender before we kill you.”

The Hero took one last long look in the mirror. “I am nothing like you. And we will defeat you, and free the world from your tyranny.” He takes the mirror and smashes it over the tiger’s head, and thereby begins the final battle.

So, my good fellows, what did we learn from this? The point I was trying to make was that stories move forward always. Every step leads your characters deeper into the Valley from which there is no turning back except once great tests are passed. Look at every scene, every page. Is your story getting deeper? Give your story a topology, and keep away from any flat areas. Good luck!