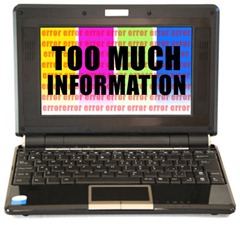 Every scene contains a certain amount of new information. Information management can be one of the toughest aspects of crafting a story, since you want to build your world and your characters with drowning your reader with mind-numbing facts. Information can be divided into these general areas:

In every scene, the POV character is going to acquire either information and/or skills that will help them along their journey. Note that these lessons may not be easy, and some knowledge is won at a very high price.

I think it’s important to impart some portion of each of those bullet points above in every scene. The next question is, what techniques to use to make this information flow seamlessly to the reader without appearing forced? Here are some ways:

Another point is that your character must grow in each scene. Whether growing in skill, knowledge, or in experience, each scene is like a mini life-lesson.

What techniques do you use to pass along information to your characters and readers?