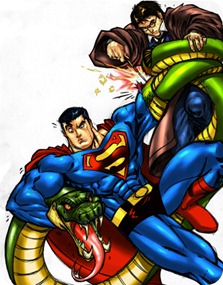 I’m going to interrupt my Scene Structure series to look a little bit at overall Character Development. In my previous post, I made this comment (slightly altered for clarity):

Why is this particular character the hero in this story? Why does he get to be the hero? It’s almost like I'm annoyed at the author's choice for the hero.

Now there are a lot of traditional explanations, things like:

But the thing I’m really asking today is this:

Why does the Hero of any given story deserve to be the Hero?

Why is Harry Potter get to be all magical? Why Superman have all the kewl powers? But I’m not talking about those guys. Those questions are fairly easy to answer, but often I watch a movie or read a book and think, “why is this guy getting to be Hero? Why not this other guy? Why not me?” So some kid finds a magical rock and now he’s a Hero. No, it' doesn’t work that way.  A better question would be, “why does Peter Parker get bit by a radioactive spider and become Spiderman? Why him? Why not MJ or Harry Osborn?”

A lot of people believe in the “rags to riches” story format, where the Main Character starts out as an “Ordinary Person” and becomes a Hero. Here’s the thing. Ordinary People don’t become Heroes. Ordinary People fail, they sit at home and watch TV, they go through life doing the best they can, maybe with a few nice accomplishments but overall they just exist. They keep their noses clean, they don’t make a fuss, and they pay their taxes on time, and maybe they get a little something on the side.

Let me make one thing clear. Heroes are not ordinary people. They can have ordinary jobs. They can have normal lives, a wife & 2.5 kids, a dog, and a minivan. But there is something intrinsically different about a Hero.  Here are a few things that I think distinguish Heroes from Ordinary People.

So take a look at your characters. Is there any particular reason they are the Hero? Or are they just in the right place at the right time? What makes them extraordinary? What makes them uniquely qualified to tackle the obstacles in the story and save the day? And look deeper than, “well, he has super-human strength,” because Superman’s not Superman because he’s stronger than a locomotive.  But going back to the Peter Parker case, why him? And I think it’s because of all the things in that list above. He’s a dreamer, he acts, he has issues he needs to resolve, and he cares. Even if he hadn’t been bitten, he’d probably been a Hero anyways. The spider powers are just a bonus.

Does your Hero deserve to be a Hero? What can you do to strengthen his case?