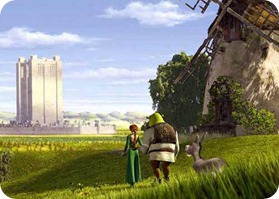 Every scene needs a Setting. Everything happens somewhere, where it’s on the plains of the Serengeti, the inner contours of the human brain, a derelict spacecraft, or a 2-dimensional Flatland, your Setting is a crucial piece of your story.

Some people have described Setting as the Third Main Character (after Protagonist and Antagonist). It’s a great way to create Conflict: create a setting that actively helps or hinders your Protagonist. A setting is filled with wondrous objects and activities. Divide the setting into these general categories.

The more lifelike you make your Setting, the more your Characters can interact with it. Think about where you’re sitting right now as you read this. I’m in a coffee shop. Nothing much going on, but let’s make this coffee shop come alive as a Character.

So how do we turn this coffee shop into a living, breathing character? First of all, you must start with your character’s Goal. Why is he here? Why a coffee shop? Why not a barber shop or a grocery store?  Is he here with a date? Is he flirting with the help? Is he working on an important assignment?  Is he worthless without coffee? Trying to relax after a hard day? A quick pick-me-up? A clandestine yet public meeting? Applying for a job here? Delivering supplies?

Once you know the character’s Goal, figure out what he notices about the coffee shop. If he’s in a hurry, it’s the slow service. If he has a headache, it’s the loud conversations. If he’s eyeing the barista, it’s her charm coupled with her disinterest. If he’s on his way to an interview, of course he’s going to spill the coffee on himself. Make the Setting Matter. If he’s struggling with commitment, fill it with either blissfully happy or hatefully arguing couples. Think of yourself as a god. It’s your job to create a setting that guides your characters in a certain direction, like there’s an “Unseen Hand” moving your character along. If your character is in a bad mood, the cheerful flowers mock him, they don’t soothe him. If he’s in a great mood, then the coffee is outstanding, and everyone in the room hushes in his presence.

How has Setting affected your story? How can you use the Setting for a greater impact?