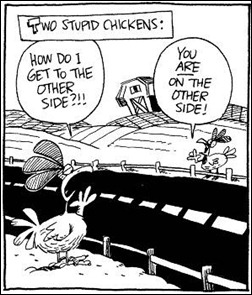 Suppose you’ve never heard that one before, and someone casually asked you this question. You might recognize the question as a set-up for the punch line, then run potential answers through your mind.

Was something chasing the chicken?
Was there birdfeed on the other side?
Was he returning home for the day? (yes I know that would make him a rooster)
Was his wife calling?
Were his chicks in trouble?
Was the coop on fire?
Was a storm brewing?

You start thinking about motivations, about what could possess a chicken to cross a road. At least nowadays roads can be treacherous with speeding cars and trucks. You might sense some conflict in that statement, as the chicken is clearly taking direct action, perhaps against a perceived threat or opportunity.

What’s happening is that the author of this riddle (unknown) is setting up the reader for a surprise, for a twist. He’s taking everything he suspects you know about riddles, jokes, stories, and using that to invent an ending that will surprise and enlighten you. One hundred thousand word novels should be no different.

This reminds me of the ending of Gran Torino (Major Spoiler if you haven’t seen it which I highly recommend). The writer of the screenplay Nick Schenk sets up to believe that Walt Kowalski (Clint Eastwood)  is hell-bent on revenge and about to shoot it up with the local gang of rapists. So he confronts the gang, reaches his hand into his pocket, pulls it out quickly, and is summarily gunned down by the gang. Except…he wasn’t armed at all. Schenk had all the clues in there to Walt’s real intentions, but the audience is led to believe that he is out for vigilante justice. In that instant, the entire meaning and theme of the movie has changed.

Think about how you are setting up your readers. Are you telegraphic everything, or laying subtle hints along the way? When your readers get to the equivalent line as

To get to the other side

are they surprised at how simple yet profound the ending is? The Chicken/Road riddle works because we’re completely thrown off by the question. How can something so simple be the answer? In tons of books, the Hero eventually “does the right thing.” It’s as simple as crossing the road. It’s kind of a basic premise of all fiction, to illustrate moral values. Yet with everything else going on, it’s amazing how confused characters can become. So in literary terms, we can then convert the Chicken/Road riddle to the basic riddle underlying all literature:

Q: Why does the Main Character go on all these adventures, endure hardships, fight villains, survive ordeals, and save the world from total annihilation?
(select the text of the answer with a mouse or type ctrl-a to reveal it)

A: Because that’s what he does.

Now for those thinking this post was about something else, here are some Chicken/Road jokes I’ve stolen off the Internets.

Okay I made a couple of those up.

Next Week: How the Chicken vs. Egg riddle applies to Character Development.