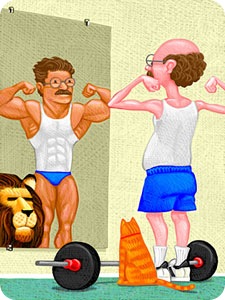 To continue along the lines I started in Heroes vs. Villains and Supporting Characters, let’s talk about strengths and weaknesses. Every character has them. Every character has some strengths, like intelligence, physical strength and/or stamina, technical skills, martial arts, or emotional strength like calm under pressure and ability to withstand pain. They also have many weakness: Bad habits, addictions, disease, ineptitude, bad parents, or ruthless enemies.

Here’s a little secret I’m going to share with you. At first glance you’re not going to believe me. It’s going to take some soul-searching before you come to grips with it. It’s hard to explain. It has something to do with the nature of things, the yin and yang of life. Without further ado, here it is:

I know you’re saying, “how can that be? And why did he drop into 2nd person present tense?”

Let’s take strengths first: Take your classic swordsman. He can’t be beaten. He’s a match for anyone. How can his swordplay be a deficit? Maybe with an arrow to the heel. He’s relied on his sword for so long that he can’t adapt to new threats. Take a brilliant scientist who can solve any kind of puzzle or problem. Except for the solution to a woman’s heart. This applies also to organizations. Take the US Military. They seem capable of just about everything. This makes them targets of derision and fear, and tend to use unnecessary force to achieve their objectives…because they can. This creates many enemies.

Now for weaknesses. Take someone who’s unable to deal with confrontation. They back down every time. How is this a strength? Maybe they keep their wits about them in critical situations. They aren’t seen as a threat so they can operate “under the radar”. No one ever suspects the butler. That’s why it’s such a cliché. Take someone with a broken leg (please. Just Kidding ;). They can’t get out of bed without assistance, but maybe that gives them time to solve a neighborhood crime. (I’ve had this idea of a completely bedridden woman who solves crimes from her bed kicking around for a while. She’ll need a sidekick who’s her eyes and ears on the ground and who’s conflicted about her role—but I digress. Maybe I’ll flesh it out and post it as a “Free Plot Idea”).

Now let’s apply this to writing:

Think about your characters (and your own literary) strengths and weaknesses and see if you can turn them around to either help your characters or create problems for them. This applies to villains as well. Give your characters flaws, because at the right moment, those flaws will become their greatest asset. Let me know what you come up with.