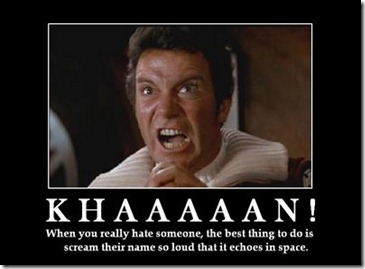 First, a quick word about my last post. After carefully reading the responses, I realized I may have made some generalities about readers’ expectations about why they read fiction. I think their point is well-taken: be careful when blogging to not make assumptions. However, I also feel that you should be unafraid to make strong points, because it leads to interesting discussion.

Now on to today’s topic. We’ve all seen it. It’s been parodied to death, yet many books and movies still use this tried-and-true method. Something happens that the character cannot control, eliciting the proverbial “Nooo!” or some variation. Darth Vader kills Obi-wan, and Luke says “Nooo!” and is dragged away. Frodo sees Gandalf die. “Nooo!” Sarah Connor first sees the Terminator (in Terminator 2). “Nooo!” Captain James Kirk’s “Khaaan!” counts, by the way.

Called the “Big No” trope,  it clearly signals an important turning point in the story. It’s a moment when the Bad Guy has his victory, when everything falls apart for the Hero. There’s only one thing left for the Hero to do: scream. But this “Nooo!” is more than just an outcry. It’s the Hero’s sudden recognition that not only is he facing physical harm and mental distress, it is that he is also facing the greatest enemy of all—Death. The stakes have been raised to their utmost.

Now when writing an adventure story like I have, I always had a couple “Nooo!” moments in mind. Especially writing Steampunk, there is one aspect that lends itself nicely to this: Airships. Airships are disasters waiting to happen. The Hindenburg proved that. But there are other dangers, one of which speaks to one of our basic fears: falling. And what happens when you combine an airship with falling? A “Nooo!” moment.

His hand slammed across Sophia’s face, a blast of pain that threw her to the deck. Viola shrieked and charged at him with clawed hands. He stepped aside and slammed the back of her head with the pistol. Viola stumbled, hit the railing, and flipped over with a scream, disappearing into the night.

“VIOLA!” Sophia jumped to the rail. “VIOLA! VIOLA!” No answer. She turned back.

Dunstan stood stricken. “No, no, nononononono.” He dropped to his knees, mouth agape.
– excerpt from Steam Palace

What’s your favorite “Nooo!” Moment, from either your own work or popular movies/ fiction?