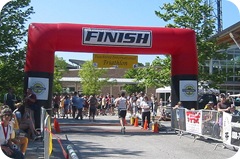 If you’re still plugging away after 23 days, congratulations! Whether you’re at 10K or 100K words, you’re facing the same age-old question that every writer faces: How do I end this thing?? Get me out of here. Help!!

Well, the secret of the Ending is to “bring it all home.” And yes, I may use a lot of clichés in today’s piece. Your Hero has spent a good portion on his time in the Special World, and now it’s time to return home, back to the Ordinary World where it all started. But of course, the road home is blocked with the biggest obstacles of the whole novel. Your Villains are hell bent on your Hero’s destruction, everything he’s ever known is falling apart, and everything he’s worked for during the entire book is in jeopardy. Everything hangs in the balance, and failure is imminent.

There are two things to focus on: Choice and Transformation. During the final climactic scene, your Hero must make a choice. And the choice is Death. Your character must choose Death over some alternative. Now this sounds extreme, but hear me out. If your character is not willing to risk death to achieve his goals, then the stakes are not high enough. Now, this Death can be metaphorical, but really it all comes down to personal sacrifice. He must lose something to win something. The result of this risk is Transformation. Through this process, your Hero learns something new about himself, about the world, and now has the power to finally defeat the Villain. This is the final lesson, the most important of the Hero’s life.

To tie it all together, go back to the first chapter, the first line, and think about the everyday problems your Hero faced. How has he changed? How does he solve them now? What has he learned from this experience? How do people see him now? Did he achieve his initial goal, or did some larger goal replace it? This is the part of the story where the most important lessons of all are learned. How do you show that the Hero has truly changed? You send him back home, and his former insurmountable problems seem like trivial annoyances which he handles with ease.

So now for my NaNoWriMo Week Four Tips:

And one final thought, courtesy Philip J. Fry from Futurama, to think about in the darkest moments of your novel, when your Hero is on the verge of defeat, and you see no way to rescue him from the hole you’ve dug:

Good luck! Next week, my exciting (actually most likely a ponderously dull) post-mortem on this year’s NaNoWriMo experience for me, what worked and what didn’t, and my plans for the re-write.