How We Turned a Wreck Into a New Car

How We Turned a Wreck Into a New Car 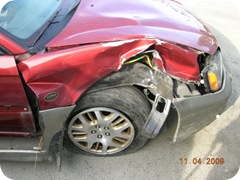 On November 3, my wife lost control of our 2003 Subaru Outback on the Interstate. It spun off the highway, up an embankment, rolled over, and landed against a guard rail. Here’s her account with pictures. She was fine…the car was totaled.

Here’s the process we went through that finally landed us a new car. I’m sure that we made a few mistakes, but we wanted to get rid of the junky $200/week rent-a-wreck.

This was our requirements for our car search: All-wheel drive or 4WD, wagon or SUV style, roomy enough for 4 tall adults and a dog, not too many miles, and within $1000 or so of our settlement check (which I thought came out a bit low). I went to car lots, searched internet ads, everywhere, and found very little in our price range ($12-14K). Jeep Liberty’s, questionable imports, and generally junkers with 100k+ mileage. We spent Saturday November 14th cruising the local used car lots. More of the same. We found an Acura and a Land Rover, but both had huge mileage. My wife found a Saturn Vue she liked, but I cringed at the thought of buying a Saturn right now. We might as well buy an Edsel or DeLorean.

We arrived at a Honda dealer around 3:30. I instantly had a good feeling when the salesman offered us a ride around the lot in a golf cart, since my wife is still recovering from her broken leg. He was an enthusiastic Asian man with a squeaky laugh. He showed us some used Elements. These are those boxy SUV’s with the suicide doors. I really liked the Element—it is kind of a guy car. Utilitarian, no frills except a good stereo. We test drove it…not too bad, even with 95K miles. We made an offer but they couldn’t come down to our range since the car had already been marked down.

We were sitting there about to walk. We relayed our sob story about not having income, and that we were limited to the proceeds from the insurance settlement. I didn’t want to finance anything because I don’t want monthly payments. I figured we were done, when a woman from their finance department comes up to us and says, “what if you could walk out of here with a new car, no payments, spending just the proceeds from the settlement, no money out of pocket?” We were like, “uhhh.” I didn’t even think for a second about a new car. We figured we’d just get some clunker and overpay for it, then keep it on life support for as long as possible.

Turns out there’s a thing called a “single payment lease". Yes, go ahead and show me all the drawbacks. Sitting in a car dealership, I made the best decision at the time. Here’s how it works: turns out that if you pay the lease up front, you wind up paying zero interest on the lease, and avoid monthly payments. Here’s my reasoning in a nutshell:

I didn’t want monthly payments. I had a good used car in the Subaru but with high mileage. Imagine this scenario: what if I had simply brought in the Subaru as a trade-in? I probably could have gotten a similar deal. There’s another huge savings in maintenance costs. Having two used cars with 80K+ miles, I know exactly how costly they are to maintain. All this expense goes away as well.

Now fast forward three years from now when the lease expires. I’ll have to refinance the residual, or lease another car. But here’s the thing. In three years (or less) we would have completely outgrown the Subaru. It would have had 30K+ additional miles at the point, so what would its trade-in value be then? So essentially, nothing’s changed. All I’ve done is trade in the car earlier than planned.

I don’t think this is a complete wash. In the long run, the new car will still need to be paid for, or returned if I can’t make payments at that time. But for now, in terms of my personal cash flow, nothing’s changed. No new payments, no money out of pocket (except we did spring for some rubber mats etc), and we still face the same problem we would have faced anyways, except we get to drive a new, roomier, and safer car for the next three years.

So what did we get, you ask? A 2010 Honda CR-V LX, a base model with no frills, but All-Wheel-Drive and plenty of room. It doesn’t have all the amenities the Subaru had, such as heated leather seats and premium stereo with multi-disc changer, but it should be a trusty reliable car for years to come. It also has a lot more safety features, which after you roll a car, becomes something important. 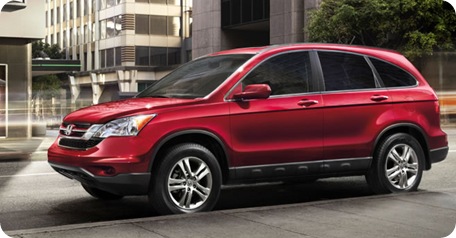