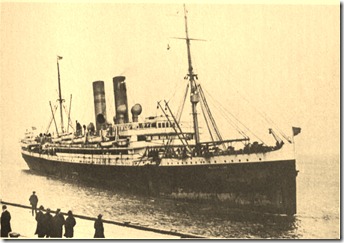 So, as a writer, I see stories. And I uncovered a doozy in my family’s history. I see scenarios worthy of Academy Awards, Pulitzer prizes, and Oprah’s book club. All that is required is the proper delivery. Now these aren’t my direct ancestors, but rather the story of my grandfather’s uncle and first cousin. But they still resound with me.

[The SS Mount Clay, the ship that brought this whole family to America in 1921]

Let’s take a look at a few of these characters.

Barney. Youngest of six…with five older sisters. I can picture his parents, finally receiving a boy (it’s not clear if there were any boys that died in childbirth/infancy) after 16 years of girls. A blessing beyond anything they had known. But when he turns 18, Barney decides to join his eldest sister Frieda in New York. His parents must be heartbroken.

Pauline. Youngest of the five girls. She’s the free-spirit, the crazy one. But when she speaks out against the injustices brought upon her people, her parents force Frieda to take Pauline with her to New York for Pauline’s own safety.

Frieda. Oldest of the six, she marries a relatively well-off man who emigrates to New York. Already with children, he pays their way two years later, but she must also take her youngest sister, the troublemaker. Frieda’s is the classic success story.

Nechamie. The father of six, five being girls. He has worked hard all his life to provide for his family. But his son’s departure is a crushing blow. Full of pride, he carries on, never asking anything from anyone, but he has no one to continue the family business, something he never gets over.

Bassie. In the middle of the six, she just wants a quiet life with her new husband. Her daughter Blossom is the pride of her life. But everything  is thrown into chaos when violence claims her husband’s life and Blossom’s cries of hunger wrench her soul.

Those are the main players in this drama. Nechamie had held everything together for years, despite the worsening conditions in his homeland. He has closed his eyes to the violence, even sending Pauline away to avoid it. But when Bassie’s husband is murdered, he knows he cannot close his eyes any longer. He has only one place to turn—his son who abandoned him years earlier and never wrote or sent a thing.

Barney’s life is comfortable. He just served his new country in WWI, still lives with his sister Frieda and her four children, and is beginning a promising career. The old country is now just a distant memory. He has heard of the unrest, of the violence, but it never occurs to him to do anything, despite Pauline’s strident activism. One day he receives a letter from his father. He has never known his father to ask for anything, but his father’s desperate tone chills him. Despite his misgivings and days of soul-searching, consulting with Frieda and Pauline, he knows there is only one thing he can do. He must travel the dangerous road back to his homeland and rescue his family before it is too late.

So I have all the elements of a classic story. A reluctant hero. A damsel (or two) in distress. A perilous journey into the heart of enemy territory (both social and emotional). A prideful father and an angst-filled son. A backdrop of social revolution. Characters filled with inner conflict. And, of course, the incredible fact that it really happened.

All that is missing are some villains, some faces to put on the forces opposing this effort. There are the usual suspects, such as unfeeling bureaucrats, corrupt officials, and ambitious military officers, but I feel like this story needs a more personal villain, the personification of everything they are struggling against. I think this is an area to use a touch of creative license. Note that this the same pool to draw unexpected allies from, although I do have a few names of people who helped along the way.

So this is a story that just begs to be written. And it is the kind of story I feel that I was made to write, a desperate adventure with a race against time. But it will require actual research to a degree I’ve never attempted before. But if I can pull this off, I think the possibilities are limitless.

Email ThisBlogThis!Share to TwitterShare to FacebookShare to Pinterest
Topics: About Me, Novel Design