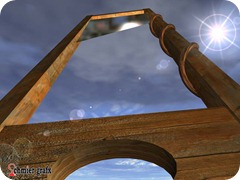 Well, for those of you following along at home, two weeks ago I posted Revision Indecision, where I spoke of how my story ran off the rails. Well last night I wrote the two most special words in all of literature, “The End.” I have somewhat officially finished the second draft of Steam Palace, and it wasn’t easy. It was like a wrestling-style Battle Royale with my characters, trying to force them into some semblance of a conclusion to their adventures while they fight each other tooth and nail.

Here’s the thing. I’ve given myself a deadline (hence the guillotine). September 1. I want Steam Palace completed by 9/1/2010. Done. Out the door. That’s 60 days to go from draft to finished product. I have other projects to work on. This revision has taken forever, and right now I don’t feel much closer than I did on Dec 1, 2009 when I finished the first draft.

Here’s the situation. I finished with ~115K words, up from 80K in the first draft. That’s 35K additional words. I need to cut it down to at least 95K. I know I’m still a little sparse on description, setting scenes and transitions, so I need to cut first before I flesh out those problem areas. Then cut some more. This is clearly the most painful part of the process, but it’s a key skill I will need. I must be ruthless. Heartless. WWVD?*

My plan is to run through every single scene, writing down all problem areas, and scoring the scenes. Check out this example of what I do. Then anything with a bad score—cut. Any characters not pulling their weight—cut. Any subplots not supporting the main plot—cut. Then patch up all the holes, rework all the scenes into a tight POV and clear prose, and send it out. Simple, right?

And, to incent myself and keep myself focused, I’ve decided to host another blogfest, tentatively on August 31 ( but I might push it to Sept  3). I must be finished by this date or no blogfest! Stay tuned for more details. It will be the bestest blogfest eva!

On September 7, I will be sending out queries. Look out world, here comes Steam Palace!

*What Would Viola Do? Okay, I know the answer to that…cut all the scenes with Sophia.