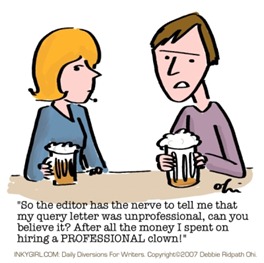 Apparently there’s some kind of “tradition” floating about the publishing industry called the “Query Letter”. The Query Letter is a concise one-page description of your work and about you. It can include elements such as a teaser, a short paragraph about the book, and an author’s credits. I’m not going to pretend I know diddly squat about writing them here. All I know is that they’re a stepping stone, the first step to publication. It must entice a potential agent just enough to get them to read a synopsis or even the whole book.

But like lipstick on a pig, not every agent will love your query, no matter how well-written the query (or the book) is. It’s just something to get you into the door, to distinguish you from the 100 other queries that agent has received that day. (It’s not a job I’d envy). The ironic thing is that the best authors may not write the best queries, and vice-versa. Yes, I keep telling myself that. Actually a bad query just sucks.

Here’s the only real piece of advice I have. I think queries should represent the book. Put the most heartfelt part of your story into the query and go with it. Let your self show. Oh, and try to avoid grammatical and spelling errors.

So what do you do when you think you’re ready to query? Here are 3 sites I recommend posting your query on for feedback:

With that said, here’s the latest query for Steam Palace. Comments encouraged.

After meeting your Evil Twin, you might just wonder which one you are.

In a world swimming in mechohorses and dirigible aivies, where the former New England colonies created a British-style monarchy, a newborn twin is stolen. Sophia is raised in a noble house and provided every advantage, while her unknown twin Viola suffers crippling poverty. A score and three years later when they first meet, Sophia is destitute; her family name and lands a victim of an unfortunate dispute with the King. Meanwhile, to Sophia’s horror, her doppelgänger Viola lives a rich, vile life off the profits of sin.

To restore her family name and ‘save’ her newfound sister from an ignominious fate, Sophia enters Viola’s dark world of the Steam Palace, a floating den of iniquity built upon a derelict barge. When Sophia’s rebuff of the Duke—Viola’s secret lover—leads to an imminent invasion the monarchy, Sophia wonders which is truly the ‘Evil’ twin. She must unite with wretched Viola to protect their families before their steam-powered enemy exterminates their hated race…Americans.

STEAM PALACE, a Steampunk Adventure, is complete at 120,000 words. I have completed a Creative Writing certificate course at the University of Washington, completed Holly Lisle’s “How To Revise Your Novel” online course, and I co-host a local critique group.

Thank you for your consideration.