In preparation for NaNoWriMo, I am (probably) beginning a series on “How to design a novel.” In this episode, I discuss Characters. 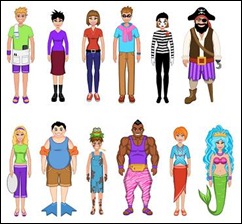 But how does one figure out what other characters should exist in a novel? Here is a list of a few to consider, based on mythical archetypes.

Your genre may include other archetypes. For instance, Romance requires a Romantic Interest, Mystery requires a Detective, etc.

So what does this mean for creating a novel? Start looking at the different types to see who would fill these roles.

I hope this gives you a good starting point when thinking about the various types of characters that populate novels. Note that one character can fulfill multiple roles, and that not all roles are well-represented. So you can have a Villain-Mentor, a Shape Shifting-Ally, or a Trickster-Herald. Every character can display different archetypes at different points of the story. Allies can be turned into Villains. A Threshold Guardian can become a Mentor once the test is passed.

Have fun with it. Will post soon with tips on developing individual characters.