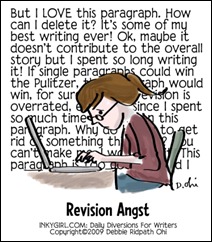 I decided to take an online (for a small fee) course on revision for my WIP Steam Palace. I’m not going to mention which one at this time because I want to run through the entire course first before promoting it, although if you’re dying to know, send me an email or follow me on Twitter. The concept of the course is “single-draft revision,” meaning that I take my rough draft directly to a final draft, using a bunch of worksheets and index cards as intermediary steps.

So far, it’s been a challenge. It’s been a lot of work, and I have dozens of pages of handwritten (which for me means nearly-indecipherable) notes. The idea is that I maintain a record of everything I write during this process in case I want to go back…but it seems to be turning into TMI. I’ve now spent 5 weeks doing nothing but reading my draft over and over from different angles and taking copious notes. This week, I’m trying to tease out all the conflict and figure out how to improve it.

I know I’m going to have to cut scenes, and perhaps rewrite large portions of the novel. The problem is, I don’t know what would be better than what I’ve written. I’m assuming the next few weeks of this course will reveal that, but right now, all I see are problems, and not solutions. I know the Climax is weak. I know the Ordeal is weak. I’m now getting worried about the beginning as well. The whole revision process is becoming overwhelming, mostly because I don’t have a clear picture of what the book should be. And without a concrete goal, it’s hard to know what direction to move in.

That’s probably what happens when you focus solely on problems for five weeks straight, you start seeing it as a unsalvageable piece of crap. What was I thinking? No one’s going to buy this. How am I going to turn a 240pg manuscript, 50 pages of notes and 104 index cards into a polished, marketable debut masterpiece? I guess that’s why I’m taking the course. Stay tuned.

(Thanks to InkyGirl for the comic)