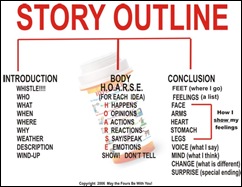 I’ve worked through a bunch of outlining and issue identification for Dawn’s Rise. At this point, it looks like I may be facing a complete rewrite. The plot can’t work as is, and I would basically be rewriting the whole thing. I don’t feel like doing that. I could write endless blogs on the specific issues, but let me summarize it by saying the whole emotional journey and transformations just aren’t right. I’m not saying that it can’t be salvaged, and that it wouldn’t be worth the effort. The problems are A) I feel really burned out and B) I don’t care that much anymore about the story. I’m beginning to hate my own characters. I know I can fix this into a publishable state. It’s just a cost/benefit/sanity issue at this point.*

So, I’m going to put Dawn’s Rise aside for the time being. I’m much more interested in creating new stories right now. I’ve been working on the same novel for 7 months. I have a partial ms, a couple of ideas, and this “new shiny idea” that I’m fleshing out. You may remember me posting a whimsical “Lover’s Journey” last week. I tried writing the same thing from the woman’s perspective (a would be “Part II”), and I wound up with a decent plot. I mean, a really decent plot. It’s a classic romance: a woman has to choose between a life of comfort and wealth or a life of uncertainty with the man she loves. (Don’t ask me why I keep getting engrossed with stories featuring heroines. But the MMC** in this outline is totally kick-ass, one of the best concepts I’ve had to date, very conflicted.). Romance writer? Me?? I already know my pen name: Andrea Rose. Would make book signings…awkward.

What’s interesting is that I wrote a whole story in under 3000 words. I don’t mean a short story, I mean a whole novel-scoped story. Obviously, it’s all telling with almost no dialog. Now, the story itself is laughably bad, and my wife couldn’t stop from laughing (at me) when I read it to her, but when I stepped back and retold it from a higher level, it worked. I started fleshing it out a bit, taking each paragraph and writing a page of details. Ideas began springing into my head: hmm, this would work as historical fiction. This would work as a Western. Heck, this would be awesome as Steampunk, which would require less research and more creativity. Is this the beauty of the outline method? I captured the essence of the story, the emotional journey, and now I can fill in the settings, the dialog, the subplots and characters to make this thing breathe. I think I may start a new blog category called “Epiphany.”

I’m probably going to work on this for a week or so, and see where it goes. I know that I will return to Dawn’s Rise, but I think I need some distance at this point. I hate doing this because I really want to be able to complete DR, but I also want to enjoy what I’m working on. My other hope is that maybe with this outline method, I can craft drafts that don’t require endless revisions and critiques—that I have the “story” part of the story worked out so I can focus on the details, instead of starting with details and working back to the story.

How has outlining helped you?

If you know of more, add a comment and I'll put it here.

*I have no idea what outline plan this image relates to, so I neither endorse nor discourage it. It’s for decorative purposes only.
**Male Main Character