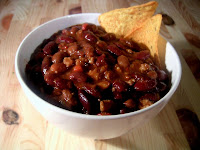 I've redacted some of the ingredients in order to keep this secret. IMHO it's the best Chili I've had. Feel free to experiment, it's really hard to mess this one up.
Start with one can of ____ beans and one can of _____ beans. I like Bush's or Progresso. Just throw the entire contents of the cans into a large pot (4 qt at least I think). Then add a can of _____ tomatoes. Start it simmering at Low while you prepare the other ingredients.
Finely dice one large _____ onion and throw it into the pot. Then chop up a variety of hot peppers. I usually like to throw some _________ and even a _______ into the mix for added heat. Don't be frugal on the peppers.
For meat you have a choice. I usually go for the ____ _____ beef but I've also used _____, ______, or even ______. Just brown and drain it first.
Of course you can't have chili without Chili. I get some off-the-shelf dried chili mix, which is basically chili powder, salt, cumin, and maybe some onion and garlic. I don't recommend some of the canned chili mixes because of all the weird ingredients like MSG etc.
Now we get down to the "secret" part of the recipe. Once all the ingredients are in, I throw in a bottle of ____. Feel free to have some sips (or your own bottle). I would go with one of the heavier styles.
Cover it all with a lid and let it simmer on low/med low for _ hours, basically until it's nice and thick. I don't usually use any kind of thickener; if you cook it long enough it will thicken naturally. It is done when it gets a little hard to stir.
The next "secret" part is the garnishes. After I take the chili off the heat, I squeeze in half a ____. I serve it with the other half, some chopped ______, and some shredded _____. I like to use corn chips to eat it with.
Enjoy!
Posted by Andrew Rosenberg at 8/10/2008 05:20:00 PM