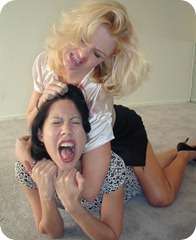 Okay. I’m going to tell you a little story about what happened during an in-person critique group I attended last night, then at the end, I’m going to introduce you to my “Two Laws of In-Person Critique” that I hope everyone will consider adopting for their own groups. These laws were massively violated with horrible consequences.

I was sitting at a table with two ladies, let’s call them “Mary” and “Sue.” I had not been to this particular group before except as an observer about a year ago. Mary had written a literary piece. It had little plot, but it painted a portrait of three people. It was eloquent, obscure, and a little rambling. But it was “literary,” a genre that I repeatedly told her that I was not very experienced in. My personal observation (that I never really got to tell her) was that it was mostly backstory and that I wanted to know the general conflict of the story before I knew the why’s and wherefore’s. Get me to care about the characters first before explaining them.

But anyways, Sue decided essentially that the piece sucked. It had no plot, it was meaningless, blah blah blah. Mary countered that Sue just didn’t understand, that Mary had X years of teaching creative writing, that the piece we were reading had won an award, and Sue was full of shit. So Sue countered that she can’t believe a creative writing teacher could write such crap. Fun stuff, no? I literally thought it would come to blows. It ended with Mary running off in tears, and when she got home, she wrote a nasty note to the group leader and left the group.

So here are my laws, which hopefully will demonstrate exactly why this ended poorly.

The Two Laws for In-Person Critique

Here’s what happens: You hear something negative about your piece. Criticism. Disdain. Who wouldn’t want to correct or fix the critiquer’s perception of the piece? So you defend it, arguing that you are correct, and the critiquer is wrong. All that does is make the critiquer fight harder to prove their point. If someone says something blatantly useless about your piece, or has no clue how to critique your genre, just thank them for their effort. Hey, they tried. People come to these groups to improve both their writing and critiquing, and put a lot of effort to try to understand what they’re reading. Sometimes they fail. I myself knew I was highly unqualified to critique this piece. I told Mary many times that I probably wasn’t doing it justice.

Now this doesn’t mean you can’t discuss your piece, or find a way to help the critiquer understand your genre and what you’re trying to accomplish. Just don’t feel you have to defend anything you’ve written. If someone doesn’t like it or understand it…fine. Move on to someone who can truly connect with your writing.

2. The Author is Always Right

I just don’t understand why critiquers have a problem with this concept. The author wrote it the way they wanted to write it. They understand what the story is about, and what they’re trying to accomplish. This is even more important when you only receive a small portion of the entire piece to critique. If you give the author some feedback and they get defensive…don’t try to prove your point. If the author doesn’t “get it”…fine. It’s not your problem. As a critiquer, you’re never going to get to be right about what you’re reading, except in your own head. You have at best an uneducated opinion about something you know little about. Know your place. Now if the author wants to discuss some of your feedback, that’s fine and encouraged. But if the author gets huffy or defensive or argumentative, then move on. It’s not worth it, and an argument helps no one.

Realize that the author has spent countless hours on the piece before you received it, and you’ve probably spent 30 minutes. By offering the piece for review, the author is establish a trust with you that you will do your best but no more. When it’s all said and done, the author is the one who lives with the piece, not you, and they are the one who ultimately determines what works and what doesn’t, not you.

I hope this illustrates what went horribly wrong last night. I’m shocked that someone with literary teaching creds didn’t know how to shake off a poor critique, but Sue just wouldn’t let it go either. I really hope neither shows up again to this group, because I don’t care for the drama. Except that it makes for good blog fodder.

Remember, we’re all in this together.